A trip to Big Moose, South Otselic and the story of Grace Brown!

Well the summer is almost over.  After being stuck here in Eaton for another summer while recovering from the floods and other things… I decided to take a “busman’s” holiday to Big Moose Lake in the Adirondacks.

The factor moving me in this direction in was brought on by a history side trip to South Otselic. This small town with its national claim to fame… the Gladding Fishing Museum and Gladding Company Factory… is also the hometown of Grace Brown. 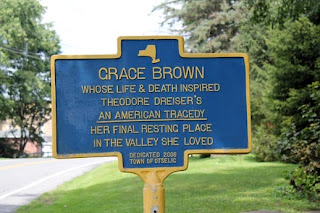 Marked with a historical marker its quaint cemetery is the place that Grace is buried, her story however, continues on and even sightings of her ghost bring visitors to Big Moose Lake where her lover Chester Gillette killed her in July of 1906.  Gillette had registered at one of its lodges the Covewood under an assumed name.

The Central New York area is so full of interesting history that one piece leads to another and another and this piece took me to the Big Moose Lake scene of the murder.  Though the day was cold the sun was high and the scenery was beautiful to say the least.  Big Moose and its lodges was once the summer retreat of the wealth and is today still a respite from the outside world.  The road in which winds through the wooded area is the only road in and out.

As then it did then the train still runs out to Big Moose Station… but of course much less frequently than in the 1906 era when Gillette brought Grace Brown there, took her out in a boat, beat and drowned her.  Chester of course met his end in another spot in Central New York… the Auburn Prison in the electric chair, after being convicted of her murder. ( Also of his baby she was carrying.)

This story became the plot of the best selling novel the American Tragedy and numerous movies including "A Place in the Sun" with Elizabeth Taylot and Montgomery Clift.

Both places are worth a look-see and a great way to get out to the Adirondacks to enjoy the scenery or to visit the fishing spots of South Otselic.

The Goodsell Museum in Old Forge is another great “history spot” where much of the areas history is kept alive. For you fall foliage folks this is a great spot for you to see fall color at its best!

Here is the trailer for A Place in the Sun!

Posted by Back Street Mary at 4:03 AM