Joseph Morse and his Distinguished Family 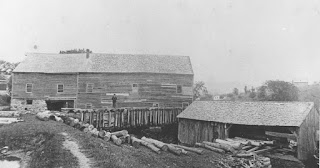 History is a fickle friend that changes its mind as new and different information surfaces from the long ago past. Many times this occurs when a new tidbit of information comes from and old newspaper article somebody clipped and stuck in the back of a book.  Such an occurrence is common.

While going through a number of early clippings I found an article put out for the Centennial of Madison County in 1906.  The information would have come from a reliable source as the Morse family still resided in Eaton and always loaned history out for research.  The article lists itself as the first in a newspaper…but what paper I do not know. I include a part here.

“The silver cup referred to in the first installment of this paper and presented to Joseph Morse in 1819 by the Madison County Agricultural society, was one of the most attractive relics in the exhibits at the centennial exercises by Prof. Briggs at Eaton Union School March 21st, 1906.”

I would love to find out where this silver cup is…the museum would love to have it since Joseph Morse is considered the founding father of Eaton.  The article goes on to give us a picture into Joseph.

“At his death, at this time of need in the new country, while he was yet in the prime of life and in the midst of usefulness, became a personal loss to the inhabitants, who individually mourned him as a father, brother and friend.  Together they had striven through many a crisis and conquered supreme difficulties.  He was of a generous nature, yet he helped men to help themselves and so strengthened the spirit of independence.”

Joseph was born in Sherburne, Massachusetts and married Eunice Bigelow in 1768, on April 24th.  Four children were born to them before their removal from Massachusetts, and four were born in Eaton among them Ellis and Eunice that I have written about.

Ellis assumed the role that his father played to the community and inherited the Stone House… once considered the showplace of the area.  Ellis also sold and owned the controlling stock in the Hamilton Skaneateles Turnpike that passed by his house.  Ellis as a boy worked in the Morse Distillery that produced a vast amount of revenue and booze that supported the community both in jobs and in cash. He was self-educated with some schooling at the log school located then, near the cemetery and friends with Charles Grandison Finney who also attended that school. Ellis made sure that each of his children including his daughters was educated.

The second son of Joseph Morse was Joseph Morse, Jr., who removed to Pennsylvania and was there several times returned to the legislature of that state and also became judge of his county’s courts.  Calvin, the third son, was an extensive farmer and held responsible offices frequently.  He was elected to the state legislature in 1842. (The museum has some of his count books) Having no sons Calvin’s daughters became conspicuous as eductors.  The eldest, Belinda, was the wife of Andrew Cone, manufacturer; the second daughter, Miss A. Eliza, was assistant lady principal at Vassar College during the life of Dr. John H. Raymond, the first president of Vassar…I have written about her life and her famous ”Locust Hill” cottage.

Alpheus, the fourth son Joseph Morse, lived in Eaton until his later years.  He was a merchant, scientific farmer and a large manufacturer, being many years proprietor of the Alderbrook Woolen Mill, known first as the Morse & Brown factory and later wholly in Morse’s name. His interesting early businesses included make cast iron plow blades, growing asparagus that until recently grew in the wild around the cemetery and investing in silk production.

Bigelow, the fifth and youngest son of Joseph Morse, became a prominent citizen of Onondaga County. He became a wealthy farmer in the Fabius area… this because of The Skaneateles Turnpike that passed in front of it allowing him to take his cops to market. I learn from other letters that he

Bigelow had terrible headaches and died young most likely from a brain tumor.  His daughter Allie moved to Eaton and lived with his brother Calvin. His two sons, Frank B. and Darwin, under the name of Morse Bros, became Eaton’s long time reliable merchants.  Frank B. was the postmaster at Eaton most of his life for more than forty years. The museum is lucky enough to have info and beautiful pictures of his children.

Posted by Back Street Mary at 5:36 AM