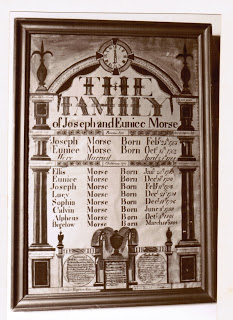 For young people today it would be interesting I think to learn about how things were done and how people traveled in the early days... even learning about money and currency.  There was no plastic money or Western Union.

Currency was issued by different institutions, not only the US Treasury.  In reading some of the old Morse letters of Eunice Morse Pratt and her families removal from Eaton to the west,I ran across this interesting letter that explains much about this and life in the early 1840's as well as information on her family for genealogists in the area.

Dear Brother - I received your letter the fourth of April dated March 15 and with it the Draft for eighty-six dollars dated March 15. The Draft here was worth ten percent more than currency.  I sold it to Mr. Locthan the largest merchant in Palmyra for cash and left the money with him and get a little at a time as I want to use it.  The western Banks are a breaking so fast there is no safety in keeping one dollar.  I shall get what things I need and let the rest be until have use for it.

You would like to know where I live.  I lived with Edwin three years then I went to the farm and stayed two years.  I liked to live there I felt as if it was my home in January I came to see Edwin I found him sick with a cold, nobody but his little boy and Gridley for company and blacks to do his work he wanted I should stay it is a good home for me.

Gridley goes to school here and I expect Mary here this week to go with him.  There is no school near the farm.  I expect to stay here with them some time.  Virgil, Warner, Fanny and James live on the farm.  They are a sawing and grinding and making the improvements better.

Warner is one of the Candidates for sheriff he thinks he should get it but it will be a doubtful case.  The present sheriff and another popular man are on the ticket.

Edwin is doing a good in land and is farming and selling wood.  He has two children Betsy and John.  The little girl lives with Lawyer Wright her uncle.  There is a great scarcity of money here all business men are crying hard times many go to work and spend less.

Eunice had quite the life and her obituary tells us much of her story and so I include a bit of it here."

"Mrs. Eunice Pratt, widow of the late Dr. James Pratt and mother of

Colonel Warner Pratt, died on December 30, 1869 at the residence of her daughter, Mary Shotton, who is the wife of Judge William N. Shotton.

The deceased was born in Sherburn, Mass December 10, 1790 and emigrated with her father, the late Joseph Morse, Esq. to the Burchard Farm in Madison County, New York, in 1796.  Here, her father built one of the first frame houses erected in that region.  It was near the Indian trial from the Susquehanna to Stockbridge and thus at a remarkably early period in life she made an acquaintance with the red skins and began an extraordinary life of pioneer service.

In 1802, four years before the town of Eaton was set off from Hamilton, her father moved to Eaton, which is now the seat of the family homestead and erected one of the first gristmills south of Whitestown.  Here in company with the late Ellis Morse, Esq. and her other brothers and sisters, she spent her youth, became familiar with every phase of pioneer life, its perils, its hardships and its attractions, and here supplied with such books as Dilworth’s Spelling book, Dabolls Arithmetic, the Columbian Orater and the Bible, she began her education with she concluded at the old Academy at Clinton where she graduated two years prior to its institution as Hamilton College.

In 1814 Eunice married to Dr. James Pratt, a brother of the father of the Hon. Daniel D. Pratt, United States Senator from Indiana and raised a numerous family.

After his death she again, in 1836, entered upon the pioneer life and removed, with her family, to Palmyra, Missouri, making the entire distance in a wagon.  Shortly afterword a family homestead was purchased within what is now part of Knox County and she located thereon.

She was certainly a woman of indomitable resolution and energy or at the age of 46. when a widow, she would have hesitated long ere removing from a home among friends surrounded with the refinements of civilization into a comparatively unknown section to again endure the trials, privations and hardships incident to pioneer life.  She was, as it were, a connecting link between the centuries and had, in her youth, seen the wilderness of New York transformed into a center of civilization.

She had seen towns and cities spring up on every hand and institutions of learning, now justly celebrated through out the country, established.  In middle life she had again contributed her energy to subdue the wilderness.  She had again seen the form of the savage recede from the rushing time of civilization and once more had seen towns and cities rise phoenix like from mother earth.  Her memory was richly stored with narratives of the War of Independence and she had lived through two important conflicts through which this country has passed.  What an unusual experience was hers."

I could not have summed it up better...a true glimpse of our past and a women's role!