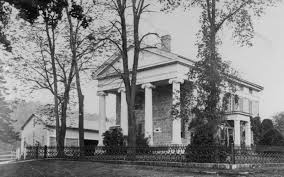 It is so interesting to find history in your mailbox.  I received a note from a lady in Missouri who was looking for information on her family members who arrived from Eaton in the early 1830’s.  Since I do history on the Morse family it proved to be an interesting relook at history for me.  Her relative was Eunice Morse, Joseph Morse’s daughter.

Eunice received a good education starting as a child in Eaton under the tutorship of Dr. James Pratt our town’s first teacher.  He taught school early on and the school rotated from Col. Leland’s to Joseph Morse’s and on to the “Center” as it was called near todays Morrisville.

Pratt was married to Laurancey Eaton, who died and left him to fall for one of his students, daughter of Joseph Morse.  Their wedding was the first at the Old Stone Morse Mansion and was attended by anyone who was important from Gerrit Smith and his father to Mrs. Leland who arrived in a carriage guarded by other guests, the Native American friends of area.  It is said they came in full native regalia on impressive horses.

She and her husband eventually moved on to find a new home and follow others from their family and area to Missouri.  Unfortunately, on a trip west he was killed.  Undaunted she decided to follow and look for the truth.

I have copies of some of the letters she sent back from there and they are so interesting I thought I would do a series of articles on her, her time, and Eaton.  Included here is an excerpt from - Palmyra Marion County Missouri in October of 1836.

“Dear brother - We arrived safe in Palmyra in five weeks and one day from the hour we left home had a very pleasant journey most of the way.  We had some difficulty to get through the mud, which we should not have had if we had started sooner.

When we came to the first bad road we had to walk some and ride some.  We found a man with a four-horse wagon without a load.  We hired him to carry us and our load to Indianapolis 36 miles then we found roads very good until we came to the first prairies in Illinois here these roads were very good a few roads then a slough so deep it was almost impassable.  It was nearly dark and we were nine miles from a tavern.  David was sick with a headache.  We began to be afraid of being stalled in the sloughs.  We soon saw two horsemen a coming towards us one of them road forward to show us the way.  He offered to put in his horse and ride and let David ride our smallest horse, which was very tired.

We got along very well until a little after dark.  The horses then mired in a slough and after making many unsuccessful attempts to extricate the wagons the horses fell and they had to hold their heads out of the muddy water till they could clear them from the wagon and as a last resort we left our wagon and rode two on a horse near three miles.  We then arrived at this young mans house that helped us.

We had every attention that poverty joined with kindness could bestow.  They went with James in the morning and got the wagon.  We hired one of them to go with us with his horses ninety miles.  We then came to the stage road, which was very good.  We did not like Ohio nor Indiana as well as Illinois the land is good and very handsome but unhealthy.  They can raise grain with very little labor.  When we arrived Galen was absent.  Two Mr. Wrights his wives brethren were a boarding at his house.  They received us with as much pleasure as if they were brothers.”

It is so interesting, and such a long journey for a widow from Eaton who became a pioneer much like her mother who came to Eaton in 1796 by oxcart with husband and children, Eunice Bigelow Morse.

Posted by Back Street Mary at 7:19 AM