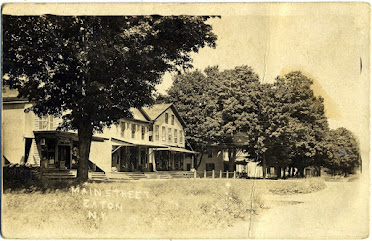 It is interesting to note that Eaton actually had a newspaper for a while; we are lucky to have a copy of one in the museum archives. Old newspapers are a great way to visit the past and give us much information on the people and businesses that once thrived in our rural communities.  I ran across an article taken from the Eaton Herald and was republish in the Madison County Leader under history.

The Eaton Herald brought to Eatonians the news of country, state, and village, and announced through its four-column, eight-page sheet much news.  Some of this was so interesting I thought I would include some of the information here.

The publisher of this 1884 sheet was G. B. Greenfield whose office was the first door east of the Exchange Hotel.  The price per inch was twice that of the Leader’s, and got business for advertisers because the Leader’s advertisers were allowed to change their copy only four times a year. Unfortunately the editor took ill, ending its run.

From the EATON HERALD

“Barnum’s Greatest Show on Earth is second only to the large and handsome display of fine stoves and ranges, for sale at G. E. Clark’s in the Blakeman Block, Eaton, N.Y.

“Paper, Sir - The Eaton Herald-just off the press-Wood, Taber and Morse will run on three-fourths time!”

On the Fourth of July…The great day passed off very quietly at Log City save for the booming of the cannon, which jarred out nearly all of N. Bence’s windowpanes.

H. C. Holmes conducted his “Temple of Variety” under the slogan “Death to Large Profits”, and the Morse Brothers stepped out in bigger and bolder letters, “NOW IS THE TIME” and proceeded to tell of dry goods, shoes, boots, and celebrated corsets-all of which were advertised as being selected with great care as to quality, and which are for sale at the lowest living prices.

L. L. Hamilton of West Eaton proclaimed in four inches, single column, that “For the Presidential year, we propose to sell more goods than ever before,” while downstream at Eaton A.D. Morton made the “Largest Stock of Furniture at the Lowest Prices in Madison County.”

B. Leavenworth offered bargains in clothing all the year around in men’s, youth’s and children’s clothing, and Jacob Dickson’s custom tailoring was warranted and guaranteed, especially the “Light Pants and White Vests,”  a specialty at this time of year.

Wooden Water Pipe was manufactured by Gardner Morse who also dealt in lumber and mill work.  On the corner of Main and Church St., Medbury’s Furniture and Undertaking House sold everything from Chamber Suites to cheap beds for hop picking.  And at that very date T. R. Jones was opening a meat market in the basement of the Blakeman Block.

Under a section called local intelligence we find out that that season was very dry… and  “S. A. Curtis was the champion at the glass ball shoot Thursday.”

“The editor of this paper is responsible for the assertion that Eaton has the best cornet band of any place in Madison County.” “J. Morey’s little boy fell from the milk wagon while going to the cheese factory yesterday, the wagon passed over his body.  The extent of his injuries we have not learned.” “Ed Wilcox, mail agent on the Central was quite seriously hurt at the collision between his train and a freight at Albany on Wednesday of this week.  He is able to be around, however, and will doubtless soon recover.” “The Stage Line was being operated between West Eaton and the O. & W. Station by E. Isebell three times daily.”

In Georgetown the Herald reports… “Fred Hill was hit by lightning for the second time in his life and still lives to tell the story. D. Whitmore was also getting his billiard parlor in running order to make way for wizards of the cue. “

It was a much more simple time when Eaton’s name had gone from “Log City” to its more sophisticated proper name of Eaton Village. The summer brought an influx of people from NYC while Wood, Taber & Morse put on much labor to run its machine shop night and day because of demand.  Eaton was also the site of the Madison County Home and vast agricultural fields that attracted large groups of pickers in the summer…a “Bustling Town”’

Posted by Back Street Mary at 9:35 AM