Eaton is the home of Wood, Taber & Morse Steam Engine Works the maker of agricultural steam engines, The company also made and sold steam engines that worked the fields.

The first four-wheel drive traction engine transmission that used metal gears like today's models  was the brain child of Allen Wood and his engineer Loyal Clark Tabor.  They had a  wish to make this unit available to pull traction engines into the field with all of its equipment.....in other words the precursor of today's tractor.  Yes it meant man rode on it into the field for the first time. To accomplish this, Tabor invented and patented its design with all its gears... 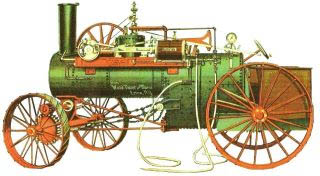 Allen Nelson Wood founder of the company was born in the community of Middleport, one of the stops on the Chenango Canal just below Eaton. His mother and father named him after the great Lord Nelson. Captain Allen Wood Sr., Allen’s father, was a Revolutionary War veteran and a well-known Freemason. His death recorded on March 16, 1823, resulted in the largest Masonic funeral in Madison County history up until that time and for some years to come, because of the decline in Masonry after the William Morgan incident.

Through his records of stock found in Cornell's Olin Library it was evident that Mr. Wood invested in many banks across America.  Mr. Wood was also instrumental in bringing the Midland Railroad to the area. To bring the railroad in, Eaton agreed to bond for $150,000.

The railroad, of course, allowed an easier and wider distribution of the steam engines and parts, as well as affording the company an easier way to bringing the needed iron ore from the Clinton area to Eaton for use in the foundry, and the coal from Pennsylvania. A foundry, we might add, which made all the parts for the engines - even to casting all of the needed gears.  Wood and company also employed many through the deepest depressions of the post Civil War period and set up and sold rights to the Oneida Royal Company.

Mr. Wood's great granddaughters visited the Wood House on Brooklyn Street in 1996, and took pleasure in telling of how... their great grandfather, Mr. Wood, who was considered the larger than life pillar of the community... Mr. Wood was on the Board of Directors or Trustee for the banks, the Eaton Congregational Church where he was also a Deacon and Sunday School Superintendent, he was Trustee of the Eaton Village Cemetery Association, and an abolitionist whose house was and Underground Railroad stop and of course – the founding member and co-owner of the famous Wood, Taber & Morse Steam Engine Works... stood only 5 foot three inches tall.


*An interesting side note for genealogists is Lucinda's sister Jerusha, who married their father's brother John Newcomb, lived and is buried in Eaton. One of Lucinda's brothers Daniel married Anna Clark of Eaton.

Posted by Back Street Mary at 7:53 AM