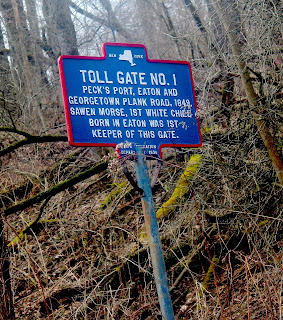 The story starts in the Town of Eaton and a small dot on a NYS map today called Pecksport, near Lower Leland Pond.  The pond was named for one of Eaton's first settlers Joshua Leland... and the area named for Josiah Peck who came from Rhode Island... the spot is now a fishing paradise that was once the busiest port on the Chenango Canal. His son Alonzo and Josiah built a large warehouse on the Chenango and the Lower Leland Pond.  Alonzo was also a very important person in Hamilton and ran a canalboat line.


Located at the actual summit of the canal... which, started a quarter mile to the north at a stake in Johnson’s Swamp in Eaton... Josiah and his son Alonzo  dug out an area that would allow boats to unload and board their cargo headed or coming from the then industrial and business giant of Eaton Village located just over the hill. This port was needed for the delivery of coal and iron ore for the early Eaton foundries, and grain for the famous Morse Distillery.

The Georgetown Plank Road also started there in the early days and maning the first tollgate on this road was Sawen Morse, first child born in Eaton and keeper of that gate. His father Benjamin was a Revolutionary War soldier who came with Joshua Leland.

Pecksport was also the home of one of baseball’s early greats, George “Hooks” Wiltse.  The Wilste family lived near Burchard farms and the numerous Wiltse children attended the one-room schoolhouse located in Pecksport. Living just a stone’s throw from Bouckville, in the Town of Madison, “Hooks” and his brother Lewis “Snake” Wiltse grew up playing with the Bouckville boys and this progressed to playing with the famous Bouckville Summits (so called because Bouckville was at the Summit level of the canal along with Pecksport). 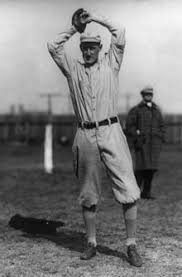 Wiltse later went on to play for the Giants as a pitcher of note and a player under the infamous John J. McGraw. Wiltse also played on the team that was immortalized in the film Field of Dreams...playing with the famous Shoeless Joe Jackson.

In those early days... as the movie pointed out, boys dreamed of become professional players and would play anywhere USA in any of the small leagues to get a leg up and also to be paid.  As a matter of fact Wiltse, like the others, would jump a bus or train to get somewhere to play in a small local game for MONEY!  Yes money, many times a team paid a player or two to beef up their lineup...

The story of the local rivalries and the times when baseball was a truly American pass-time and was the local entertainment of pride, is well documented in a book by local historian and author Jim Ford. Titled “The Pride of Cidertown”, Ford tells the story of local lore in one of central New York’s baseball hot spots.

Posted by Back Street Mary at 8:52 AM