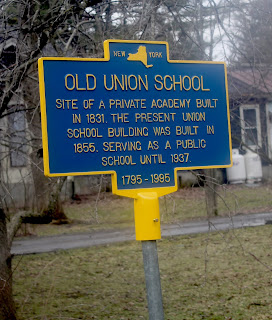 The schools in Eaton date back to its earliest days.  The Morse, Pratt and Leland families immediately started schooling and Dr. James Pratt acted as the teacher.  The original school rotated from the Morse House to the Leland House to Dr. Pratt’s house with students staying at each house during the winter weather.

From there a small schoolhouse was built in the area now known as the Eaton Village Cemetery, which, was located on the old Indian Trail.  That path is still the entrance to the cemetery today.
During the Bicentennial of Eaton the tie capsule was buried there.  This is the school that Charles Grandson Finney attend as a young boy when he stayed with his aunt and Uncle the Sylvester Finneys. 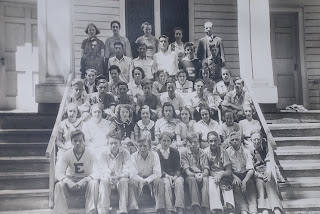 Eventually the Union School system was formed and a proper school was built on the site of a private school on Brooklyn Street during the 1850’s, that school was in use until the brick school on Morrisville Eaton Road was built.  The house next door was also used for schooling. Today of course the school system has centralized.

The Brooklyn Street school was eventually purchased and turned into a home with the windows from the Drugstore that was torn down installed on the first floor living room..

The Old Town of Eaton Museum has probably more memorabilia of the different schools than any other thing and has a great collection of pictures, books and even schoolbooks.  One photo of its last graduating class is available to purchase at the museum.

The Bicentennial Cake was set infront of the school that was then Pauline Brown's House and if you view the video below you will see so many people enjoying its grounds once again including many members in the picture above that were still alive in 1995.

Posted by Back Street Mary at 7:01 AM