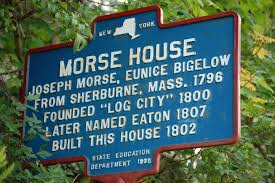 The Stone Morse house dates to 1802 when it was built by Joseph and Eunice Bigelow Morse who came to Eaton (Log City) from Sherburne, Mass. in 1796. At Joseph’s death the house passed by will in 1819 to Ellis Morse his eldest son.

In 1869 Ellis Morse died leaving it to his second wife, Adaline Bagg Morse, and his children by both wives.  All the children quitclaimed to Adaline at this time. 1874 in went from Adaline Bagg Morse by will to all living children of both wives.  So Jane Morse, the daughter of Ellis and Lora Ayres Morse, the only unmarried child living, occupied the house until her death in 1908. 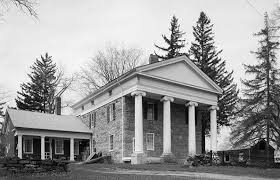 Then in 1923 on October 13, Adaline Morse Mott, daughter of Walter Morse, who was a son of Ellis, became sole owner as all possible heirs quitclaimed and the deed was recorded.  In December 7, 1923 by deed, Walter Webster Mott and Rowena Mott, children of Adaline Morse Mott became joint owners. In 1946 by deed, the house passed from Rowena Mott to Walter Webster Mott and his wife, Josephine Holcombe Mott. They became the owners who in 1963 also became the occupants.  The house was vacant from 1908 to 1946, and then only occupied on vacations and weekends until 1963.

Over the years the house changed from a one-story house with outside wall fireplaces to the structure we see today.  The main alterations coming in 1846, when Joseph’s oldest son, Ellis Morse, who had inherited the “home place” from his father, remodeled the house.  In a letter, owned by Mr. and Mrs. Mott, written April 29, 1846, by Adaline (Ellis’ wife) to her “Aunt Dana” in Princeton, Massachusetts, we can get a glimpse of that work.

Adeline wrote, “We are now on the eve of great changes.  Mr. Morse proposes… to make alterations on the house, to tear out chimneys and take down the battlements and finish with a cornice, remove the bedroom from the east end of the house to the west end and have folding doors between the two rooms on the south side, a piazza on the east end with four large columns…. (He) is expecting something like thirty men in less than a month from now and designs to prosecute with vigor until finished…”

They made all these changes as planned, and many more also.  The fireplaces and chimneys were removed.  A chimney was built between the northeast room (now parlor) and the southeast (now library) wall with a fireplace in the southeast room.  In it is a Franklin “set in” with a handsome mantel and hearth.  Unusual feature of the mantelpiece is a panel in the pilaster-like projection at either side of the entablature under the mantelshelf that contains a picture frame complete with glass for pictures of “latest dear departed.”  A chimney that is now used by the furnace was built from basement to roof on the west wall of the northwest rooms.  The chimneys had stovepipe holes in all rooms to accommodate the small iron stoves provided in lieu of fireplace.  Four of the little stoves still existed at the time of this survey.

Today the house remains vacant and neglected not even the lawns are clipped and vines have overgrown one of the most beautiful colonial homes in Southern Madison County. As neglected, with a large gash in the roof, is the old land office from 1802 that sold scripts for the Skaneateles Turnpike and acted as a firehouse for the main house called then a manor. The old hose reel it contained is gone like all of the past occupants.

A video of the Stone Morse House when owned by the Morse Family!