More on Early Settlement and the Mills 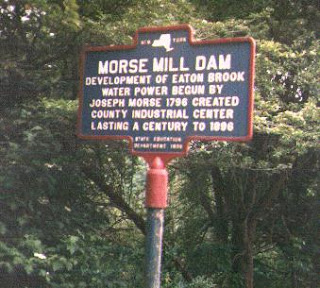 The history of settlement in many of our early communities formed around lush rich soil, water bodies or old transportation routes, in some cases around something as simple as mineral deposits like “salt”.

In early times a salt source or spring was sought and early settlers flocked to it to boil off water to gain a cup of the needed mineral.  Salt in colonial times was as valuable as gold as a source of money or for trade. Salt as a trade-ware is traced as early as 6050 BC.  Salt is a need mineral for man or animal…needed to dry meat and preserve fish, it was also needed to make many other components of life.  From the history of salt in America we find from “SALT WORKS”  – History of Salt….. “Salt motivated the American pioneers. The American Revolution had heroes who were salt makers and part of the British strategy was to deny the American rebels access to salt. Salt was on the mind of William Clark in the groundbreaking Lewis and Clark expedition to the Pacific Northwest. The first patent issued by the British crown to an American settler gave Samuel Winslow of the Massachusetts Bay Colony the exclusive right for ten years to make salt by his particular method. The Land Act of 1795 included a provision for salt reservations (to prevent monopolies), as did an earlier treaty between the Iroquois' Onondaga tribe and the state of New York. New York has always been important in salt production.”

The settlement of Eaton sprang up around its water sources, since it was water that powered the mills.
Joseph Morse moved to this side of the Chenango to take advantage of the flow of water from the Eatonbrook.  He staked his fortune on making the needed mills, that included a gristmill, lumber mill, woolen mills and a cotton mill.
History is in some ways is a road sign to the future. It seems that as a historian you are continually seeing the current happenings in a context of what has transpired in the past and then predicting what will happen in the future.  In every small town in rural America we can see that past disappearing before our eyes.  Sitting here at night writing I wonder if perhaps there might be a rebirth of the rural small communities as more and more people do business from home and seek out peaceful setting to escape to.

Here in Eaton we have the reservoirs and small lakes that in the past filled with only summer people…but more and more of these “camps” are becoming year round homes.  As the suburbs inch closer and our electric & Internet improve… I wonder if some of these areas like Eaton might have a new rebirth.