The Bark Hut and the Revolutionary War Veterans 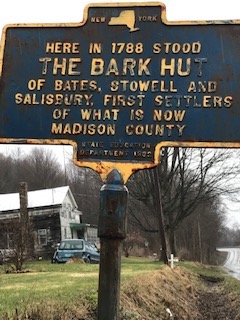 If the Memorial Day Celebration is able to take place, I decided this year we would honor the Revolutionary War Veterans who settled this area, including Smith's Valley.

One of the more interesting aspects of our area is the old historic marker that stands on River Road marking Madison Counties Early settlement history.  The marker lies just below the Old Town of Eaton Museum and lists the first clearing in what is now Madison County.. 1788...The Bark Hut.

If one takes the time to pick threw Mrs. Hammond's History of Madison County you will note many stories on our early founding including where men forged into what was still considered" indian country," and upon arrival made a rudimentary hut to stay in. This area actually formed what was eventually a set of log homes that stretched from Lebanon to Eaton then dubbed "Log City". 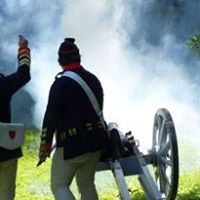 Most of these men and those that came later were veteran's of the Revolutionary War and some had followed Col. William Smith to his land patent set up by Joshua Smith (not a relative) who served under him. Joshua was sent by Col. Smith to find him the best tract of land in the area...which Joshua did, and where upon he built a bark hut.These actual squatters were indeed our first settlers and ironically today over two hundred years latter,  many of these families names still live on here.

Col.William Smith is buried inWest Hill Cemetery in Sherburne, but members of his family (sisters & brothers) owned land in Eaton.  It is interesting to read the many storied by Harry Hart, and one in particular that accused Smith's brother Justice of trying to hold up deeds from purchasers.

To honor these men we decided to do a talk on the Revolutionary War to open our Memorial Day
Celebration if it is possible.

Posted by Back Street Mary at 7:53 AM