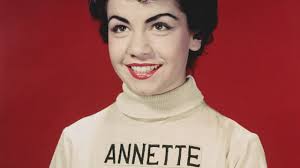 The past few weeks have certainly been an interesting if not sad time for America.  It started with the death of Annette Funicello who was a true piece of the culture and time that I grew up in.

It was an innocent time of growing up in an America reflected in TV by shows like Mickey Mouse Club, Lawrence Welk, Perry Como and all those family sit-coms like Leave it to Beaver, Dobie Gillis and so many more.  Fun was going to a school hop or a party at the beach in the summer.  Movies were simple stories for teens - love and loss, love found…and all time… music you could dance to.

Annette’s death did seem to haunt us as we sung Beach Boy songs and remembered Frankie Avalon, Fabian and the rest of American Bandstand’s crew.  I can still remember that my brother and friends started, with my dad’s help, a carrier current radio station.  We built it from scratch…I was the Sunday semi-classical hours host...they spun the rock and roll records and went to the hop Saturday nights playing records as what we would call disc jockeys today.

I think quite frankly it was a much more honorable and simple time when music was changing and “Rock and Roll” was at a peak.  Young hopefuls could get their music played on local stations and radio stations could enjoy finding new stars.

In Syracuse for concerts we went to the old Three Rivers Inn for an inexpensive Saturday show to see some well-known young singer or group in person… hitching a ride with someone’s dad or mom.  Yes we didn’t have our own car!  Some of my best moments were walking home from school talking with friends along the way.  Yes we talked about our day in person - not on the cell phone or via the Internet.

I think many people my age were stunned and felt that that time in America had come to an unfortunate and very sad end.  Annette was dead...and worse yet… of a coma from Multiple Scleroses...a coma she had been in for years.

Obituaries popped up everywhere from the Beach Boys Website, Disney sites, News Sites, Radio, TV everything…why….I think because we wanted secretly to get that part of America and our much simpler and innocent life back!

Enjoy this clip of American Bandstand!

Posted by Back Street Mary at 6:08 PM