Another side to the Thanksgiving story, Natick, King Phillip's War and Remembrance! 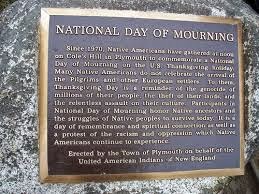 The date of May 26, 1637, a mere 17 years after the settlement of Plymouth, the tensions between the Puritans and the Native Americans had become strained.  The very people who they stole the corn from on their landing and who showed them how to plant corn and other crops. as well as how to fish and hunt, were being exterminated by the English and Puritans who had now flocked to the shores of New England.

The most militant of the Native tribes the Pequot has started warring against the white settlers who were pushing them off of their land.  So Militia and English troops set up and ambush on May 26, 1637.  The surrounded the Pequot settlement and using surprise burned the native fort to the ground.  The women, children, sick and elderly hid in their teepees and thus were burned alive.

Governor Bradford is quoted as saying: “It was a fearful sight to see them thus frying in the fire and the streams of blood quenching the same, and horrible was the stink there of: but the victory seemed a sweet sacrifice, and they gave the praise there of to God, who had wrought so wonderfully for them, thus to enclose their enemies in their hands and give them such a speedy victory!’

The history Channel named this as one of the 10 days that unexpectedly changed history, for the attitude of removal or cleansing would be our policy.  We regarded all those Native Americans who would not become civilized - near white as Devils who must be killed or driven out.

The Wampanoag’s and their famous Chief Massasoit, who were friends with Bradford and the Plymouth settlement, began to complain about the white settlers freely taking the crops and invading their land. In 1622 a militia Captain killed 8 friendly natives and impaled their sachem’s head on a pole in Plymouth.  Hostilities had begun and as the colony encroached more and more on their land, New England became a battleground.  The Wampanoag’s thought they could coexist with the whites but by the 1670’s Massasoit’s grandson Metacom, known to the English as King Phillip, began what would become known as King Phillip’s War.

Metacom claimed that phony contracts were used to take large tracts of land from Indians who had been made drunk.

When a praying Indian who helped set up the Praying Indian Village of Natick was found murdered, three of Metacom’s followers were accused, found guilty and executed.  King Philips war was on…settlements, major towns and villages were burned and sacked until finally on August 12, 1676 he was killed…thus ending the King Phillip’s War.

*It is noted that in Plymouth for that Thanksgiving they bought his head back and paraded it around town.  They Puritans thought it a sign from God of their righteous ownership of this new land...they the chosen people!

Posted by Back Street Mary at 4:59 PM