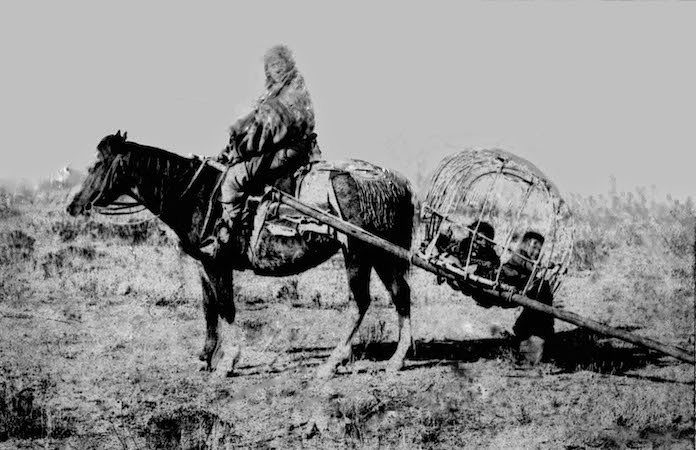 We have been getting ready for our Colonial Holiday Celebration this wee k and I have been going through the genealogy of a number of the early settlers of the Town of Eaton and vicinity it is interesting to note how many of the early settlers could trace their bloodline back to members of the Mayflower.  Myles Standish III directly from Myles Standish is buried in the Eaton Cemetery.  Patience Kent, who married Bigelow Morse, was related to three of them: the John Howland, the John Bilington, and the Isaac Allerton.  Some like Hanna Hall Clark are related to the first elected official, Governor Bradford.

Bradford was a very interesting person who was born in Austerfield, England, and who faced many hardships in his early life including the death of his mother and father.  William Bradford, who as a boy walked to a separatist Church in Babworth, broke at an early age with the Church of England.  This break eventually led him to Holland and on the venture of his lifetime with his fellow Pilgrims, to the New World.

Once here in America, Bradford was elected to office as Governor, a post he held for 36 years, the first ten of which he received no compensation for.

Bradford wrote a number of books of poetry and books on Congregationalism: his most important work, however, was a volume called Of Plimouth Plantation (Which we will talk about at a later date.)

From The Mayflower Quarterly, the American historian Samuel Eliot Morrison says. “In 1636 the Pilgrims even created a Bill of Rights of their own.”

The article, written by J. Allyn Bradford, shows that in the rules they set forth which included that no laws would be made or taxes laid without the consent of the citizens (called Freemen), a free election of Governor and Assistants, the right to an impartial and equal justice, nobody was to be punished except by the law of the Colony, as well as a trial by jury, only called if there were two witnesses to the crime and or sufficient circumstantial evidence.

Between Bradford’s and the Colony’s reforms was the separation of Church and State, something we still employ today.

The key word in our pursuit of the history of the Pilgrim’s is DEMOCRACY.  Democracy, is the basis for the
Pilgrim’s government, carried through both the church and the state.

The church of the Pilgrim’s was based on a primitive church discussed in the Bible in the Book of Acts.  In our Colonial terms it was called Congregationalism, a subject that Governor William Bradford discussed in full in one of his writings late in life called A Dialogue Between the Older and Younger Men.

The Pilgrims were actually pushed out of England because they believed that the King was not the head of the church, but that Jesus Christ was.  The church itself was democratic in all of its dealings, and it left marriage a civil, not spiritual, right.

William Bradford must have been a shrewd and valued leader in all aspects of the unbelievable hardships faced by this group of religious rebels who crossed a raging sea and forged a home out of unfamiliar, hostile surroundings.  Bradford’s election 30 times to the post of Governor of the Plymouth (Plimouth) Colony certainly proves that.