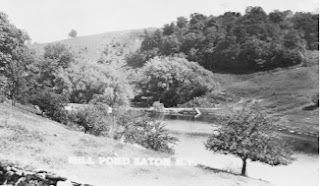 The heat continues....Humorously I ran into one of the cashiers in the local grocery store who saw how hot and tired I was and commented that I was just as miserable when it was freezing cold...TRUE!  I did get to sit near the Alderbrook again and so this weeks blog came to mind...How many know the history of the West Eaton Millarea? Then this history blog is for you!

This mill is one of the old landmarks which our citizens will regret to see pass away.  Some 35 years ago, an old saw mill stood upon the site, which was purchased by Alpheus Morse and John Brown.  They also obtained land of Simeon Chubbuck , …land upon which to erect and build bogs and to flow water into the pond.  In 1849, they built and put into operation the well-known Alderbrook Woolen Mills.

It was a wooden structure four stories high.  They built a fine boarding house, a cottage or two and the Long Block, a long building.  The factory was in the shadow of the northern mill, a very pretty location.  The Mill employed some 75 employees and manufactured some of the best quality cashmere and doeskin.

In 1856, the firm failed, after which Alpheus Morse effected an arrangement and continued the business.  During the war, he made the army and navy blues, his goods being in such demand in the early years of the war that much of the time the works were run night and day.  Mr. Morse ran the mill with the cooperation of different individuals with varied success until 1874 or ‘75, during which time he built three cottages on the terrace overlooking the sheet of water.

In 1876, the premises were purchased at a mortgage sale by Messrs. Lakey & Co., who sold to D.E. Darrow and Philo Walden in 1879.  Darrow and Walden soon after removed two stories of the upright part of the mill, putting in a new roof and otherwise repaired it.  The Long Block had become a ruin nearly ready to fall when they removed it. 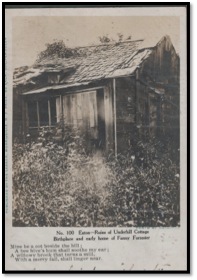 In 1883, they leased the mill to John Klock from St. Johnsville, N.Y., for paperboard manufacture.  Later, James Healey from the same place became associated with him.  Last year, Klock and Healey sold their interest to Messrs. Howe and Son.

The cottages on the terrace have all been sold to different individuals, and now all of the buildings belonging to the mill property, all that is left, are the wool house and the boarding house.

Fifty years ago, before there was ever sound of factory bell, hum of wheels or clash of looms in Alderbrook dell, it was the delightful home of Emily Chubbuck, the gifted “Fanny Forester.”  Here with her father and mother, her brothers and sisters, she lived her free joyous childhood – amid the wild picturesque beauty of nature, inhaled the breath of poetry…and wrote some of her most charming stories.

The stories of busy enterprises silenced the Muse and for more than a third of a century held away.  The actors in the drama and their works are low in the dust; and should the pristine romantic beauty and poetic atmosphere of Alderbrook return to it, then this third of a century is simply bridged over by the force that evolves destiny; a period, a scene, fallen into oblivion…dead and buried.

**And so it is today...back to the wild pristine slumber of the ages…

Posted by Back Street Mary at 5:56 AM