The Fourth of July is here, but let us look back to the past to celebrate not only the 4th but "Community"! 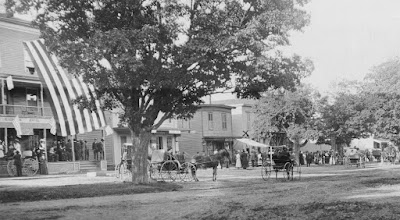 The Fourth of July is here!

As usual the big celebration will be in Hamilton since colleges and money still speak.  In the old days the big celebration was in each small town and originally here in Eaton... though I am sure it was modest in 1788.  Eatonites celebrated with enthusiasum because out of the Revolution came a majority of those early settlers... men who served during the Revolution including a number who served with Joseph Morse senior at Lexington and Concord.

Today we celebrate Eaton Day on Memorial Day Monday since all eyes unfortunately go to Hamilton.  I actually believe it is time for each community to go back to a community celebration like they used to with children playing old fashioned games, church suppers and music...Americana!

But since we can't this year I thought I would dig out this piece I wrote a while back and put up some photos of past Fourth of July events for your perusal and I hope your enjoyment!

Eaton 4th of July Field Days in a Bustling Town


The best remembered and photographed times in Eaton were the “field days” held yearly to celebrate the Fourth of July.  This community, born out of Revolutionary blood felt it a duty to put on big yearly celebration.

The big day usually started with cannon volley, which in later years is remembered as Patty Miles “firing” his anvil.  This was done by filling the hole in the bottom of the anvil with black powder and setting it off.  Any late sleepers would be awakened if their children had not already forced them out of bed in their excitement to get downtown. 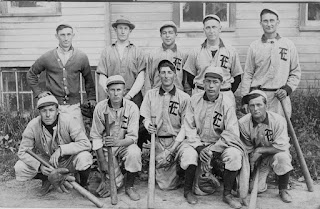 Horse racing was part of the day and baseball games were played in different fields around town, big rivals for Eaton’s team was the Bouckville Bucks.  Food was available everywhere from the churches where the ladies aid put on a dinner, to the food stands on Main Street (front street) and the hotels, some brought their own lunches, but everybody ate. 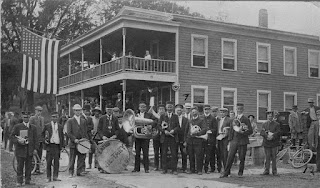 The "Town" filled with music with people listening, especially when the Eaton Military Band played. In the evening there was always a dance that was well attended at the opera house in town, and the Rebekah Lodge usually served coffee to the attendees, with the dance continuing until midnight.

By the 1920’s, the world was at war; the steam engine plant was closing, water power had given away to electricity, woolen mills were closed, the Chenango Canal had ceased to be a transportation route and was only used to fill the Erie Canal, the “Great Depression” was on and the march to the city for work began. 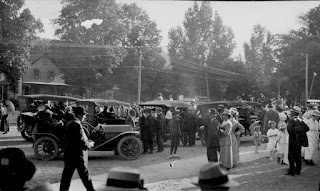 No more does the anvil fire, and only once every three years is there a parade in Eaton and “History Day” is now on Memorial Day,  (instead of Field Day on the Fourth of July). In Eaton, however the memories live on in this rural community, remembered most of all for its once glorious past replete with famous Eatonites, famous inventions and stories of the wars. Eaton like so many of its rural counterparts has gone to Sleep!