Well what a week!  I bet you are tired of me saying that…but rain… cold… rain… hot…trying to paint was hopeless... although I persisted!

Then us Eaton folk got robo calls from the Department of Homeland Security telling us to  go to our basement…Tornado approaching you!!!  What!

At that point I was saying please tornado take my house as it seems it is the only way I am going to get out of this horrible cold this winter!  Alas and AFLACK…  I mean alack… No such luck!  So I muddled through painting and all the rest.  My phone still doesn’t work but my sister-in-law got through somehow so that I would know (Thank You!) But I am still here, not in Kansas with Rascal standing in for Toto!

It was fun to give a talk to the Crouse Memorial Daycare people in Cazenovia they seemed to enjoy it and asked me back with my little Armchair Traveler gig.  Thanks to Elizabeth MacArthur Braun for the invite! 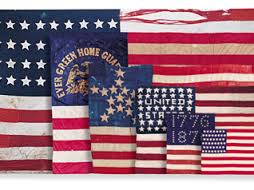 Happy Flag Day!  Yes this Sunday, June 14th is Flag Day.  As a matter of fact most people don’t know much about “flag day” and so I thought I would do a history quest and find out how it came about!

Flag Day or Flag Birthday was suggested originally to celebrate the 108th Anniversary of the date the “stars and stripes” were officially adopted as our flag.  That occurred on the anniversary of the Flag Resolution of 1777.  So in 1885, a schoolteacher by the name of BJ Cigrand of the Fredonia, Wisconsin Public School decided to hold a celebration on June 14 for his students to learn about the flag and celebrate its official “birthday”.

Different groups agreed with the concept of having a designated Flag Day and on June 14th, in 1889…. in New York City… a teacher (George Blach) picked up on the idea.  The Official Flag Day idea was forwarded in the press and in that way brought to the public’s attention.

Eventually the State Board of Education of New York adopted the idea in 1891. By 1894 the State of New York went a little farther ordering the flag be flown on all state buildings.

The celebration of the flag was heralded by different American organizations like Sons of the Revolution etc. and eventually was officially established by the Proclamation of President Woodrow Wilson on May 30th, 1916.  It still remained a state to state observance until on August 3rd, 1949, when President Truman signed an Act of Congress designating June 14th of each year as National Flag Day.

So fly your flag…if it hasn’t been blown away…Hope your week was better than mine.

Let's all go to Kansas!

Posted by Back Street Mary at 5:29 AM