Hops, Beer, Patents and History on the march in Eaton!

The new history book that is coming out for Memorial Day Monday is filled with new tidbits on history and leads to another book that I am working on describing the Patents that came form the area.  As they say.. everything old is new again...and that goes for the history of an area and its products. 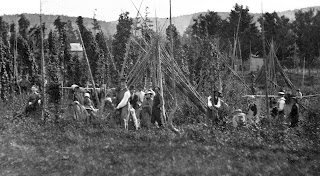 That is an unbelievable statement but it is true. Madison County grew hops and the crop was a bumper crop that made many of the farmers in the area, but it also destroyed some.

The Hop commodities market was actually moved to Waterville where hops were bought and sold with the fluctuating hops market.  Many an Eaton Farm grew hops and held hops to get the best value at market. They also welcomed the pickers in season because in town the money flowed from outside to in.
Many a farm put families up during the “season” and stories of fun and friendships made abound… a more simple time.  My own mother recalled taking the canal to Madison County where her family would pick hops.  She as a small child remembered hiding under her mother’s skirt on the trip.

The hop fields of Samuel Coolidge ran between Madison and Eaton near the Summit level of the Chenango Canal.  The field crops were called by some locals, as filled with “the Devil’s weed”… because of Hops addition to beer to make it bitter or to add flavor and aroma.

Hops would later disappear from the hills of Eaton and Madison County because of blight and because of white or blue powdery mold.  Another problem “Temperance” played a large part.

Another facet of hop production were the numerous attempts to patent labor saving devices.  A few out of Eaton and the area are pictured in the back of the book.

One was a “HOP-PICKER’S BOX” designed by Frederick A Fargo of Pine Woods, New York it was Patent No. 949,915 dated November 22, 1881. (Fargo Corners in Eaton today).  He states that: “My invention consist of a hop-picker’s measure or box having such construction that it may be easily taken apart for stowing away in small spaces and for transportation, and easily set up for use.”

Another interesting invention out of Morrisville is a Vine Trellis.  The Trellis was submitted by Andrew S. Hart and is Patent number 495,673, dated April 18, 1893. Hart says: “The object of this invention is to provide a trellis for training chiefly hop-vines, and which shall be permanently erect on the ground to afford ready access to the uppermost parts of the vines.”

The time of hops passed and became a time of cows and corn that have in recent time given back land to the cultivation of Hops in Eaton and in Madison County.  It is interesting to note that at Fargo Corners today you can see a new “hop field” located on today's  Mosher Farm.