A cold Sunday of reality in this World of sadness and tears...Let us Pray for the ones they call the Children of today! 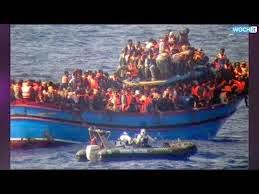 Sometimes I wonder what is wrong with people today.  I think some have never had real hardship in their lives.  Can we have compassion for animals but not for other people?

This weeks news headlines set off a whole flood of feelings I did not want to let into my mind right now.  I have been following some Italian news because of my 500 year ago cousin and the 150th Anniversary of the Italian Red Cross, when I can across an article on the plight of Libyan refugees trying escape in rafts and boats  across the Mediterranean to the various posts on the European side.

A policy of trying to pick them up and saving them from drowning has been called foolish…”that it is encouraging them to try it”.  In other words if they pick them up and save them from drowning they are causing this problem to escalate.  So we as humans should let them drown?  The reality is they should not have to take such extreme methods to save themselves and especially their children from starvation and war.

On line, via the web, the global warming people are screaming about climate change causing these extremes in weather…while the disbelievers are screaming back that this is all hype and just a way for some to make more money… Some say that we need more oil…OIL?  They say that we have given too many subsidies to “green energy” a source that has produced little energy?

Mean while people in our own country are freezing and we are cutting programs to our own poor, disabled, or elderly and don’t recognize the marginalized poor that have lost their homes that have become “our boat people” living in tents and shelters?

We are a crazy lot….”War”, greed and religion, has wrought all of this…”Men fighting with GUNS and hatred”.

I guess we have forgotten too soon the price of WWI and WWII.  Herbert Hoover was the man in charge of the rescue of millions of starving people after and during both conflicts.  He had an unbelievable job considering the food had to be brought in because war had devastated the land and infrastructure…not to mention the men and animals lost! Countries unable to feed themselves.

I am stuck here in old Eaton this year trying to save and find homes for a few cats…”dump offs”…I can’t stand to see an animal ill, injured, starving or hurt. I try to help everyone I can and …for the life of me… I can't understand why men go to war for power or religion…and how anyone could condone just letting people drown while they are just trying to save themselves and their children.

In America we are raging against immigrants…but in reality we are raging against ourselves… as almost all of us except the “First Natives” were brought here for a better life or for religious freedom by our forefathers and mother’s.  So on this Sunday in the blog...I pray for all the “children” of the world….”The ones we call the Children of Today!”

With that thought I whipped out my guitar and sang this old Gordon Lightfoot tune...listen to the words…understand the meaning!

Posted by Back Street Mary at 5:07 AM