Little Berries, thoughts of traveling, and the beautiful Palatine Church... 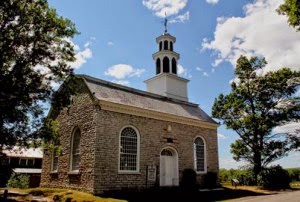 The week has been busy with sorting elderberries  baking and getting ready for our little berry event.  In my heart however, I wanted to be on the road visiting my favorite places for fall travel...The one love the most is the old Palatine Church on the historic Mohawk trail to Albany near Nelliston.  I take people to it whenever we are driving by.... it is probably the most notable German Palatine structure in upstate New York.

Rising off the highway it stands on a hill near a spot that was once the settlement of Fox’s Mills. The limestone church dates to 1770 when it was erected by the subscription and the labor of a number of families in the area. The Garoga Creek, which flowed near by, provided waterpower for a number of mills and businesses in the small community, now gone which is today called Palatine Church.

Most notable among the families of the area was that of Hendrick Nellis who not only donated the land it stands on, but helped build the church with other community members.

Nellis and his grandson however remained loyal to the Crown at the outbreak of the Revolutionary War and had to flee to Canada. Other members of the family remained so typical of the division of loyalties at that time.

History has it recorded that in October of 1780, when the Tory forces under Sir John Johnson dropped down from Canada with the allied Native Americans to burn the farms and harvest of the valley, the church was saved by a British Officer who stopped it saying he had promised Nellis.

The site is also a historic marker site as it was the camp of the American Army under General Van Rensselaer after winning the Battle of Clock’s Field retreated to this site to make camp. Van Rensselaer refused to pursue the Tory forces, an act for which he was later tried for treason.

Today the church has been restored including its famous raised pulpit with sounding board and has had its organ rebuilt by noted organ builder Robert S. Rowland. Rowland built it in the style of old colonial organs. The inside has many historic artifacts on display as well as a rare 13 star American Flag that was found during the renovation.

Visitors from all over the world come to what is today call “The Shrine of Lutheranism in the Mohawk Valley”, and all passing it on Route 5 still admire its Colonial beauty! I love it!
For more history and videos visit my website at www.historystarttproductions.com.

Posted by Back Street Mary at 6:58 AM