With all of the Ice Bucket Challenges for ALS on line and on TV this past month, I got to thinking about a gentleman by the name of Huddie Ledbetter… better know to us Folk music aficionados as Lead Belly! 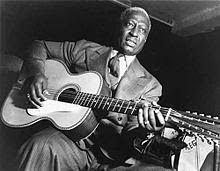 Lead Belly was a black man born in the late 1880’s on a Louisiana plantation who ended up in jail for murder and attempted murder and yet managed to leave that part of his life behind…using the experiences for learning… gaining the respect of not only the “Blues” community but also of many of the Folk music world.

I myself loved his renditions of Down in the Valley, House of the Rising Sun, Good Night Irene , Rock Island Line, Midnight Special, and marveled at the man who actually brought the 12-string guitar into the world of my era of folksingers.  He was also proficient at the accordion, mandolin, piano or just about any instrument he picked up.  It was said that he got out of a Texas jail by writing a song appealing to the warden after performing for the inmates and the warden’s friends for a number of years... and his name…well there are many theories or how he adopted it… but Lead Belly stuck.

In prison John Lomax who was doing folk music recordings for preservation as well as a written history of the genre, discovered Leadbetter who eventually toured with him as he lectured at colleges and universities.  Lead Belly’s drinking however, caused trouble and the two eventually parted.  Later in his life he picked up a relationship with Lomax’s son Alan and toured with him.

Over the years he wrote, arranged, and sang hundreds of folk, blues and spiritual standards… that have been adopted by musicians from Folk to rock…but for those of us my age and for me it will always be the popular “Good Night Irene that we remember.  I remember it the most for being my brother’s favorite song when he was a little kid; he made my poor Uncle Lou play it over and over and over when we visited his house..

Lead Belly’s great voice and 12 string eventually brought him from blues to a new set of “folk admirers”, as well as albums and gigs with legends like Woodie Gunthrie, and Josh White. In the end however, the man with iron hands and booming voice, and a figure larger than history, fell victim ALS.  Before he was unable to play or sing he did a much-remembered concert in Texas ending with singing “Spirituals” with his wife.  Another “Legend” felled by ALS!

Posted by Back Street Mary at 8:00 AM