Uncas, Last of the Mohegans, Mahicans, Brothertown and our local history! 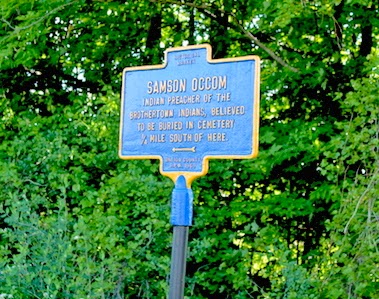 With all the rain this week I was unable to finish a video that I have planned to do on Samson Occum's graveyard at Occum Grove. As the Madison County Historian I got to meet one of the Mahican historian's who was researching the different families that migrated to Brothertown and although many think that the Brothertown and Stockbridge tribes just signed the paper to sell the land without duress before their move to Wisconsin... this is something I sincerely doubt considering the atmosphere and hatred of the era of "Indian Relocation to reservation in the West".  We may never know.  But locally the move occurred after the death of Samson Occum their leader.

Samson Occum was an unusual man… he was said to be a direct descendant of the great Chief Uncas of the Mohegan’s.  (There were a number of Uncas leaders… a fictitious one was put in as a character in James Fennimore Cooper’s “Last of the Mohegan’s”.)

Occum studied at the Rev. Eleazer Wheelock’s “Latin Theology” school and was able to read English and Hebrew. After graduation Samson became an ordained Presbyterian minister and teacher to the Pequot’s of Montauk, New York.

In 1851 his former teacher Rev. Wheelock…asked Occum to travel abroad to raise money for a charity school he was founding for the schooling of Native American children in Christian white ways.

On this tour of England, Occum and a co-speaker raised over 12,000 pounds for Wheelock and preached 300 plus speeches (sermons – appeals) to an audience that was most likely in awe of a Native American preacher and speaker. *King George himself donated 200 of these pounds.

While Occum was out of the country however… the money he raised was being used by Wheelock to start what would become Dartmouth College, a school that catered to children of white families with some money.  (Wheelock had also failed to take care of Occum’s wife and children… something that was part of the agreement he made with Wheelock before leaving.)

So with his son-in-law Joseph Johnson, Occum then set out to found his own tribe of Christian Indians from the New England area, they became known as Brothertowns.  The Brothertowns settled on a parcel of property given to them by the Christian Oneida’s of Kanowanhole, the land lying in today’s Town of Marshall.

This piece was just outside of Rev. Samuel Kirkland’s parcel now called Clinton. (Kirkland)  Ironically Kirkland said that he too was going to found a college where the White and Native Americans could learn together.  That college became today’s Hamilton College and up until recent years that school had not graduated one Native American.

Occum’s home is marked by and NYS Historic marker near Deansboro and Samson Occum is buried in the Occum Grove Cemetery on Bougusville Hill Road. His obituary was carried in many Newspapers and the Rev. Samuel Kirkland delivered his funeral sermon.  Some of Occum’s papers rest today at Dartmouth College.

The chief of the Christian Oneida’s that supported the colonies in the Revolutionary War and great friend of Kirkland’s who gave land  and promoted the college for co-education of Native Americans and whites...(Skenandoah) is buried with Kirkland at the Hamilton College Cemetery.

Hamilton College was also the birthplace of Elihu Root and and tour of the green and cemetery are a great way to enjoy a hot afternoon and a way to step back into "Hisoty"!

Posted by Back Street Mary at 5:49 AM