Brothertown a forgotten part of our CNY History and local history! 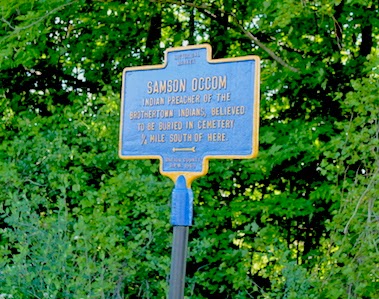 There is so much history in this little CNY area I live in …but it seems time and time again only the glitzy, money pushed, history sites make it to our attention.

Take for instance the existence of a peace-seeking town where people could interact as brothers working together to form a new community and a better life after many struggles.

No it isn’t a commune with religious fanatics or gun totting radicals… it is a place called Brothertown.  Yes Brothertown.
This town like every other Native American site has been pushed out of our local history.  Brothertown was located around the area we call Deansboro today.

The population of it was made up of a number of New England tribes that had been marginalized (our new modern term) as the white man took over American soil.  Pequots, Mahegans, Mohegans, Narragansetts,  and more. (Yes Uncas’ Mohegans)

The idea was the brainchild of leaders like Joseph Johnson and then organized and realized by Samson Occum.  Both Native Americans who had attended the school of Rev. Eleazer Wheelock, both Christian converts.  Samson Occom became the first Native American to have his works published and was considered a fabulous public speaker which can be attested to by the amount of money he raised in England for Rev. Wheelock’s cause… of educating Native Americans in Christian white culture. The money raised eventually helped Wheelock form Dartmouth College, which like our own Hamilton College pandered to white societies children.

Started on a tract of land given to them by the Oneida Nation prior to the outbreak of the Revolutionary War, the community never came into being until after the Revolution.  Then the group in the 1830’s was pushed out to Wisconsin.  A few remained or returned thanks to the help of Quaker missionaries… but the site itself now is just another American community called Deansboro, and roads like Bougusville Hill Road are nothing but back roads where a NYS Historic Marker denotes an abandon cemetery or two… and nothing more.

Samson Occum was a special man we should know about in our local history.  More to follow.

Posted by Back Street Mary at 3:52 AM