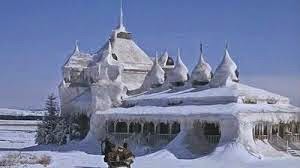 Waking this the last April Sunday morning of 2014 to snow flakes was truly a discouraging thing.  The cold damp air as the cat slid out the door came rushing in at me… and as I held the door my thoughts once again flashed back to the Boris Pasternak novel and the film Dr. Zhivago. This cold year is now 116 days old and it seems there is no respite in sight.

The scenes from the movie at Varykino and all the ice hanging inside the old mansion has made me smile with remembrance as all winter my house has been so cold that the windows were frosted over in the unheated majority of the old structure.

Thoughts of Boris Pasternak and Russian politics have been pushed to the front of the news with the Olympics, the Ukrainian situation and Putin... it is bringing to life with his divorce and actions a new novel that would rival Zhivago in a more modern way.

Posted by Back Street Mary at 5:19 AM