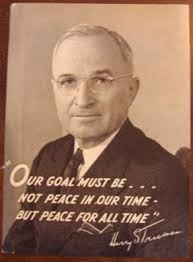 Through all the years of studying history my singular favorite President of the United States has been Harry S. Truman and this winter with my study of books on the Great Depression, World War II, and Franklin Delano Roosevelt I have not changed my mind.  The press called him the "accidental President"…but he wasn’t…he was chosen.

When Franklin Roosevelt ran for his unprecedented fourth term he choose not to go with Vice President Wallace instead he went with Senator Harry S. Truman.  Many thought this was an odd move, but in studying the time closely you begin to realize that Roosevelt knew he was going to died in office and he needed a man capable of handling the peace negotiation after the war that was coming to a swift end in Europe, and a man who could deliver action to end the war in the Pacific with Japan.

Truman had worked for years in the Senate and had done a superb job on the Truman Committee on the Railroad situation and of stopping waste in the contracting of our military bases during the war.  In fact Truman was considered a true Democrat who did his President’s will and a sincere and honest man… a very rare commodity in Washington.  A man who could carry on his goal of gathering the World's powers into and organization to keep the world at peace. (The United Nations)

At the last Democratic National Convention before his death Roosevelt was adamant that he dump Wallace and that he put Truman on the ticket.  The trouble was Truman did not want the job.  He loved being in the Senate and it took much badgering and a direct call to Roosevelt to get him to accept the offer.

The telling moment in history for me is when Truman meets the President before they start the campaign and the President asks Harry how he was going to campaign.  Truman replied “by air”.  Roosevelt turned to him and said, …”No…one of us has to be alive to be President!”

Roosevelt knew he was a dying man and at that meeting Truman knew it as well when he saw how ill he looked.  Truman also knew the terrible weight that was about to descend on him, and at that point he didn’t even know about the Atomic Bomb!

On the evening of April 12, 1945 Truman became President number 33 and immediately took the reins of the government.  He was sworn in at the White House that evening.  On the following Monday he gave a speech addressing Congress at its conclusion he said, … “I have in my heart a prayer.  As I have assumed my heavy duties, I humbly pray Almighty God, in the words of King Solomon: “Give therefore they servant an understanding heart to judge Thy people, that I may discern between Good and bad:  for who is able to judge this… Thy so great a people?”

These words of one of my other favorite people in history, King Solomon who asked God for “Wisdom” not money…something we need in rulers today!

Wish we could find another Harry Truman!


"A video of President Roosevelt's home and resting place from a visit I did on April12th last year!!"
Posted by Back Street Mary at 3:42 AM