Its Election Day, November 5th a date that has a ton of history attached to it… everything from  Woodrow Wilson and Ulyssus Grant being elected President, to Susan B. Anthony casting the first women's vote..  To me however…the best piece of history for this day (in this crazy world) is an escape into the past…. November 5th is the Birthday of Leonard Slye!

Leonard Slye came from a poor hard working family.  He was born on this day in Cincinnati, Ohio in 1911, to unusual parents who at one point moved by building a houseboat and floating to another place.  Fate literally carried them and the houseboat to a piece of property that they bought.  When a flood occurred it floated their houseboat on to the property and instead of building a house, and they lived in it.

Leonard and his father worked driving trucks, worked in a shoe factory, or did anything they could find as the Great Depression took its toll on whole families including theirs.  When his sister Mary married and moved to California, the rest of the Slye family followed.  Len decided to become a singer and joined a group of men who sang at the different local camps filled with people camping and picking fruits and vegetables, families just trying to survive.  In later years he was often quoted as saying that the movie and book “Grapes of Wrath” was a true portrayal of the times he lived in… in every way. 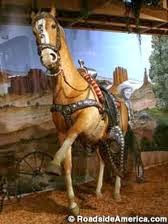 He broke into the movies playing a cowboy in Gene Autrey films until one year Autrey pulled out his contract.  So here an opportunity arose… and with the help of Will Rodgers he was renamed Roy Rogers and became a star.

From there he gained fame with recordings with his music group The Sons of the Pioneers. He stared in 100 movies, becoming a Radio Star, and Television Star.  His marriage to Dale Evans took him, her, his horse Trigger and German Shepard dog Bullet into the hearts and homes of every family in America.

As a humanitarian he supported all types of causes for children becoming a Shriner and Mason.  To this day his name evokes a kind of smile at what America idolized and what its children longed to be…. a cowboy or a cowgirl.  When we grew up, many of us wanted to own a horse and to ride into the sunset to strains of “Happy Trails to You!”

Posted by Back Street Mary at 8:06 PM