This week, the Government shut down, World War II, Patton, and The Lost Children!

What a week…. government shut downs…people burning themselves…. unarmed mentally ill people being shot in their cars ... instead of having their tires shot  out… boats of refuges trying to escape war capsized...  everyone on edge?????

I have been doing this year’s calendar for Eaton and decided to do it on the events and pertinent dates of World War II, the second war to end all wars… which of course never end. 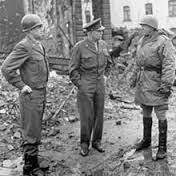 I actually have finished my list of 7 books to read on the war from Eisenhower’s Crusade in Europe, Ambrose’s Eisenhower and the 5 volumes of Churchill’s…  I came away horrified that we still go to war without realizing the cost.  It appears our wars are more civilized now… war is not civilized.

Eisenhower’s book in his own words concentrates on the alliance of the Allied countries,  trying to keep all of the leaders happy, his work to win the war with the fewest losses, and at its ending … forming a world body to prevent war ... or to have countries work together toward that cause.

Churchill on the other hand deals with it as facts and figures.  This or that ship went down… sunk… with 2,000 men drowned.

Thousands of men on boats went down unable to be rescued in the cold waters of the North Atlantic… thousands.  In the book “The Grand Alliance” he talks with our general in charge of transporting troops to Europe and says the ship Queen Elizabeth can carry them… to paraphrase - "Our General asks how many troops at a time could she carry safely."  Churchill claimed... "If you get rid of the lifeboat worry (which could only save 8,000) you could carry a Division or 16,000 men…"   "and if it is sunk?"  It was basically the price of “War”.

Churchill seemed to be speaking of soldiers like the little plastic soldiers we post -war kids played with as children behind book forts. The more soldiers you had ... the most power you had.  We failed as children to realize each of them represented a young boy or man going off to war. (Today a woman.)

So to finish the calendar I decided to put in quotes on each page, mostly by soldiers or generals.  Some are famous like Patton’s - “When we get to Berlin I am personally going to shoot that paper hanging son-of-a-bitch Hitler. Just like I'd shoot a snake!”

Then I remembered a song by Gordon Lightfoot called “The Lost Children”.  Few people remember it …but this Viet Nam era song says it all.  I include the song and music video with words after it!


Down the hall their voices ring, their feet are on the run
Phantoms on the winter sky, together they do come
Faded lips and eyes of blue they're carried in the wind
Their laughter filled the countryside but they'll not laugh again

All the games are ended now, their voices have been stilled
Their fathers built the tools of war by which they all were killed
Their fathers made the uniforms showing which side they were on
And the young boys wear the middle name for guns to prey upon

You've seen the fires in the night, watched the devil as he smiles
You've heard a mother's mournful cry as she searches for her child
You've seen the lines of refugees, the faces of despair
And wondered at the wise men who never seem to care

Goodbye you lost children, God speed you on your way
Your little beds are empty now, your toys are put away
Your mother sings a lullaby as she gazes at the floor
Your father builds more weapons and marches out once more

Down the hall their voices ring, their feet are on the run
Phantoms on the winter sky, together they do come
Faded lips and eyes of blue they're carried in the wind
Their laughter filled the countryside but they'll not laugh again

Posted by Back Street Mary at 7:30 AM