Well old Eaton has two new inhabitants this week Graeme & Darla Monahan.  As I passed the house they live in this morning I thought about…its history!  The new two some live in at a location that few people realize has a great “horsey” history.

Located on Front Street in Eaton - as it is called by the locals - actually Route 26, there was a stable behind the Monahan house in the days of Eaton’s horse racing frenzy.  This stable was well remembered by the elders who have now passed on to the other side…as a matter of fact many who have never been to Eaton talked about it.  I was told that when he once raced in the area, in that stable stayed a horse that was considered the greatest pacing harness horse that ever lived…Dan Patch. 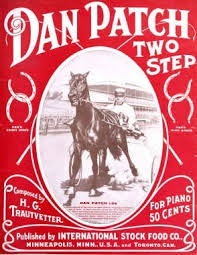 Dan Patch was a slow starting young horse sired by a six year old Joe Patchen who was a former champion, and Zelica who was not considered an exception race mare.  Dan Messner, a storekeeper, at action for $255, originally purchased him.  The horse was allowed to mature to four years until he was raced … eventually being bought by Marion Willis Savage who owned the International Stock Food Farm… an unbelievable horse stable.  Savage loved the horse and as he progressed to the champion pacer of the era, Savage started promoting him.

Dan Patch had a custom 65-foot railroad car that was custom built for him and his two traveling horse companions.   His races drew crowds of up to 100, 000 in number to watch and to enable them to say that “they saw the great Dan Patch race”.  Savage, a great publicist and promoter sold all types of Dan Patch souvenirs.

The horse became a sensation loved by the crowds and a pacer that paced his way into the record books by breaking the World Record for the mile 14 times… including once at 1:55.  Harry Truman said he had even written a fan letter to the horse when he was a boy!

Dan lived out his days in comfort with the love and affection of Savage.  Ironically, Willis Savage and Dan Patch died on the same day only hours apart and were buried with honors on the same day!

Today there are Dan Patch Historical Societies, Dan Patch memorabilia collections, even books and a movie!

That is not where the history ends however,  for in that stable was found another racing horse of note…her name was Flora Temple…and today we know her since she was the “Bob Tailed Nag” made famous by Stephen Foster in his song Camptown Races!

See history is everywhere…especially in Eaton.

Posted by Back Street Mary at 3:07 PM