It time to go to the Madison County Fair- a place of history! 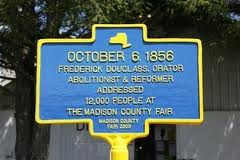 Well it is that time of the year again..rain or shine the 174th Madison County Fair will be opening on Thrusday afternoon.  The fairgrounds is actually one of the oldest in the Nation and has hosted its share of great historical events including one that occured in 1856, which as the Madison County Historian I help promote....
"History is everywhere and a lonely historical marker in an empty fairground can tell a history story of national importance. The marker sits in an unlikely place in front of the dinner at the Madison County Fair. Today the fairgrounds roar with the sound of tractor pulls and demolition derbys... but it  once roared with the excitement of a crowd estimated at 12,000 people.
The occasion was the Brookfield (Madison County) Fair of 1856 and the day was marked with a parade of hundreds of horsemen, carriages filled with young girls dressed in white and soldiers on horseback - all in Brookfield to welcome orator and abolitionist Frederick Douglass.
Douglass had come to Brookfield to speak on behalf of Presidential candidate John C. Fremont, a man Douglass hoped would win. Earlier Douglass had supported Madison County’s Gerrit Smith, but he decided to stump for Fremont as it became evident to him that Fremont had a better chance of winning, and getting a abolitionist elected was his goal not friendships."
This years "Fair" will feature a number of new things with a more modern flare including a night of Rock & Roll and a night of Country Music. The Grammy award winning rock band Survivor will perform in front of the grandstand opening night (Thursday, July 11th) with special guest Wicked & Red Hush. On Friday, July 12th Nashville superstars Steve Holy and Mark Wills will co-headline the grandstand country music show with special guest Lyndsey Highlander. Popular local bands that will be appearing throughout the Fair for FREE in the stage area include; Northern Lights, Fritz Polka, Jason Wicks, Fulton Chain Gang, BoCNY, The BOMB, Pulsate, and Gridley Page. Fairgoers will also find that the beer garden will be back on tap.
Also on tap this weekend the Brookfield Speedway Racers will return for their 4th Annual Reunion on Friday afternoon with a racecar exhibit and autograph session. Taking part in the 2013 reunion are special guest from the Motorsports Museum in Weedsport; Harry Elkima, Karl Schartner, Pam Forney & Rich Appleby.
And of course Saturday the power pulling competitions will lead off at 9am with the truck pulls - the tractors will be pulling Sunday starting at 9am. The ever popular Demolition Derby & Rollover Contest is slated for 7pm Saturday evening.
So take a break from the everyday and visit an ongoing piece of history right here in Madison County in Brookfield..tell them I sent you!
Posted by Back Street Mary at 1:44 AM