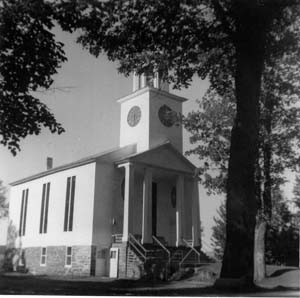 Today is a special day in Eaton, it is the day the current Eaton Church was dedicated on June 6th in 1833.  Its the historic sight I see while having coffee in the morning.

The step which bore the inscription still sits in front of the church, but has been broken up and can no longer be read.  But the churches history has followed that of the Eaton Hamlet and has in fact helped the history of the United States.

The church had many noteworthy pastors including its first installed minister the Reverend E D Willis, a friend of Gerrit Smith and a noted abolitionist.  I became interested in Willis because he lived in my house, a house that Allen Nelson Wood and his wife would buy on their return to Eaton.

During the Civil War the Eaton Churches banded together and held services attended by each other patrons during the week to pray for the wars end.

One of the best stories I have about the church is one that ended up involving me.  Melville Landon wrote a story on Mr. Wood and the Rev. Cleveland for one of his books. In the story Mr. Wood is hawking hymnals for sale in the back of the church while Rev. Cleveland was announcing the following weeks Baptism Service for children.  Wood only had one child and so when the minister said for the parishioners to bring their children… Mr. Wood piped up, thinking he was talking about the hymnal that “they could have as many as they wanted for 50 cents each.”

I wrote about this story for the Mid-York Weekly newspaper and the next week I received a package from Pennsylvania…it was the sermon handwritten that Rev. Cleveland delivered that day!...

History always returns to Eaton…so visit the museum soon and see the document for yourself…we are going to be open on Sundays 1-3 pm in the summer.

Here's a video of the church!

Posted by Back Street Mary at 3:37 AM