Susan B. Anthony, voting, and Madison County's Gerrit Smith all rolled into one..... 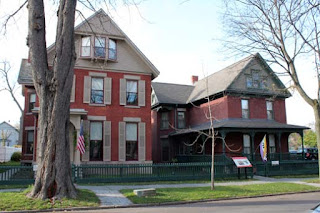 What do history junkies do for Election Day…what else ...visit historic landmarks attached to elections and Backstreet Barbara and I did just that.  I decided to take a spin to Rochester and visit the Susan B. Anthony House!

Few people are well versed in the reality of Anthony’s struggle for the rights of not only women to vote, but for all the rights of every individual citizen of the United States of America.  Born a Quaker, Anthony used these learned values and hard work to accomplish her goals.

The Anthony family moved to New York State from Mass. (where Anthony was born) after the failure of her father’s business.  She eventually went into teaching not wanting to marry and become a “drudge or a doll” teaching for years in Canajoharie.... until making a decision that she needed more in her life.  Moving back to her father’s farm near Rochester, she was given the job of running it.

The farm was a place of some wonder as abolitionists and free thinkers often visited and stirred Anthony with their stories and no doubt brought her to her goal in life... which was rights and equality for all.

Banding with a newfound friend and confidant Elizabeth Cady Stanton, she found the voice to her drive and together the two women set out to change the world, and they did.   From temperance, to women’s married rights, to abolition and then on to voting suffrage, they tirelessly worked to give all citizens regardless of color, race or sex the rights they were supposedly given by the Constitution of the United States.

Sadly, neither lived to see their work on women’s right to vote come to fruition.

Anthony did vote once after the 14th Amendment gave the right to vote to the citizens of the United States,  was promptly arrested and sent to trial.  When a fair trail could not be held in Monroe County because Anthony had spoken about it in every village and town, the trial was moved to the Ontario County Courthouse in Canandaigua.. 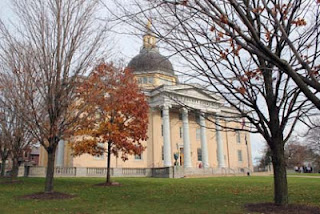 So for fun we visited the Ontario County Courthouse that Sunday to see the Celebration for the continual yearly reestablishment of the Treaty of 1794... and the polishing of the “Silver Covenant Chain” between the US Government and the Iroquois Confederacy.

And during the ceremony…..lo and behold a Quaker speaker spoke on the history of the courthouse, the occasion, and sure enough Susan B. Anthony.  She informed those gathered that this courthouse was the place that Anthony was tried for her crime of voting for President of the United States….

So these cold nights made me interested in reading a bit and as I started research on another project I ran across and interesting fact that led this history story back to old Madison County…In Norm Dann’s book “Practical Dreamer” on Gerrit Smith,  I found that after Anthony was fined $100 for her crime of voting, and Gerrit Smith sent her $100 to cover the fine!  However Anthony vowed that she would never pay one dollar of the fine and didn’t……So now I wonder what happened to the $100 old Gerrit sent????? Hmm……

When another woman activist was not allowed to vote the women’s rights activist sued (and lost) causing the United States to insert the Amendment stating that only male citizens could vote.

It was not until 14 years after Susan B. Anthony’s death that the Constitution was amended giving women the right to vote. (Suffrage)

This year more than any year Susan B. Anthony’s words struck home: “If we once establish the false principal that United States citizenship does not carry with it the right to vote in every state in the Union, there is no end to the petty freaks and cunning devises that will be resorted to to exclude classes of citizens from the right of suffrage (to vote).