The Old Town of Eaton Museum needs your Help! 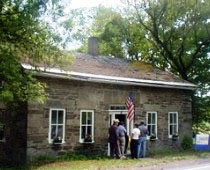 This past week has been a long one even though you could say it was like July and August.  I have been working at the Old Town of Eaton Museum trying to get the inside finished.  This has been a long haul-- since October of 2010--when a huge tree fell on the building, punching a hole in the old roof and allowing the downpour from a large rainstorm, a total of 5 inches, to enter the museum including the main room.


Many people think the Town of Eaton helps with the museum.  They do not. There are few funds for small local museums and less for this one since most members of the founding  group have died.


Chris Staudt  and I bought the museum at the instigation of the long-time residents of the town and the powers-that-be because they wanted this beautiful old historic building to be the museum for the town.

The building had been in the same family for years and then had been deserted for about 40 years, when it was sold a few times with no improvement and then sold to a man from New Jersey who was going to move it there.  He thought it was an 1830’s limestone building that could be disassembled and moved.  That didn't prove possible.
The building is an 1810 or so stone building, and when it could not be moved or sold the man offered it to Old Town Folks, the Eaton historical group.  However, that meant that to take it the group had to pay all the closing fees, his two attorneys, our attorney and all the back taxes.  Since no one in the group had money, Chris and I paid the costs. Then, since raccoons had lived there for 40 years, Chris and I had to finance the repairs necessary to get it opened.


It appealed to us personally because we had grown tired of having the museum in our home and having to open our house at all hours of the day and night to visitors, as well as serving food and refreshments to them when they lingered.

I finally got electric service installed and two heaters, opened the first floor, and paid for insurance and taxes on it for all these years.  Yes, museums do pay taxes if they aren't 501 (c) 3 organizations.


The area people are not rich, and donations have been miniscule in comparison to the costs.  The two previous "museums" in town folded. The “collectors” who were given stuff died, their things were sold at auction, and Chris and I vowed that would not happen this time.


Chris died several years ago,  and I have just finished the inside work after having put a new roof on the front during November & December  of 2010 in the snow. I will have to put a roof on the back next year, but that  can wait.


If we are to open the museum,  I need to raise $1300 plus for insurance by next year to be open for the Eaton Parade and History Day on Memorial Day. $1300 is a large amount of money to have to pay to be open one day on weekends from May 30th to October 1, but that is the cost. I also have to re-install the electric service that was taken out by the tree falling on the museum.

I have included a picture of the damage in a video below, and I am asking you to make a donation. I am not able to be in charge of all the costs anymore.  I live on  a small social security check.  All proceeds from my speaking, writing and books goes to the museum so buy a book or hire me to speak or make videos for you or an organization you belong to.  The books are available at Parry’s in Hamilton, Dougherty’s Phamacy in Morrisville, the Eaton A Z Mini Mart, Nelson Farms or on my website at www.Historystarproductions.com via PayPal.

Thank you so much.

View video of some of the damage..below.

Posted by Back Street Mary at 5:37 PM