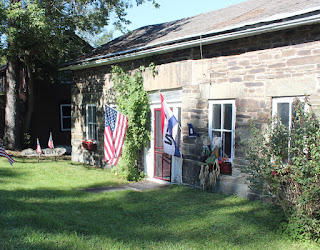 The Old Town of Eaton Museum will open on Memorial Day Monday this year for the first time in two years.  The outbreak of Covid caused many of the small museums to close their doors, which of course causes many problems including gather funding for operational purposes. The Old Town Museum was no exception.

Memorial Day Monday in Eaton has always been our main event and honors the historic roots of Eaton and its many Revolutionary Soldiers, founders, Civil War Veterans and all veterans.

The land mass itself was purchased from Col. William Smith, husband of Abigail Adams Smith (President Adams daughter).  The area now Eaton and Lebanon were the first settlements and clearing of what is now Madison County. One of the more interesting aspects of our area is the old historic marker that stands on River Road marking Madison County’s early settlement history.  The marker lies just below the Old Town of Eaton Museum and lists the first clearing in what is now Madison County.. 1788...The Bark Hut.

If one takes the time to pick threw Mrs. Hammond's History of Madison County you will note many stories on our early founding including where men forged into what was still considered" Indian country," and upon arrival made a rudimentary hut to stay in. This area actually formed what was eventually a set of log homes that stretched from Lebanon to Eaton then dubbed "Log City".

Most of these men and those that came later were veteran's of the Revolutionary War and some had followed Col. William Smith to his land patent set up and built by Joshua Smith (not a relative) who served under him. Joshua was sent by Col. Smith to find him the best tract of land in the area...which Joshua did, and where upon he built a bark hut.These actual squatters were indeed our first settlers and ironically today over two hundred years latter,  many of these families names still live on here.

The area dubbed “Log City” was also considered Masonic settlement as many Members of the Masonic order.  Today many stone buildings on River Road once called Water Street, reflect that including the building that houses the Old Town of Eaton Museum dated to before 1800.

Some of the earliest settlers of Revolutionary War era include notables Major Sinclair who purchased the land owned by Col Leland, now with a historical marker for the Dunbar Farm.  Sinclair kept a tavern and stable on that property for travelers.

Others include Jonathan Bates who came to Eaton and purchase land just below the Old Town of Eaton Museum, his grave on the side of the road is marked today with a large bronze plaque on a boulder.  Bates had served with the well known Patriot Ethan Allen and his Green Mountain Boys.

Others include Benjamin Morse brother of Joseph Morse, Major Elisha Haden, Nicholas Byer who had been a member of Burgoyne’s Hessians, Simeon Chubbuck, grandfather of Emily Chubbuck and many more. To choose one to honor was hard.

Mr. Standish was a direct lineal descendant of his illustrious namesake, Captain Miles Standish of the Mayflower, one of the most distinguished of the colonists who landed upon Plymouth Rock in 1620.

Captain Standish had been hired as the military protection for the early colony, and in true military fashion Miles Jr. was a soldier as well.

Corporal Myles Standish was born in 1748 at Duxbury, Plymouth County Massachusetts, moving to Eaton where he died on July 22, 1818 at the age of 70.

Myles Standish, Naomi Standish, and Daniel Standish were members of the Second Baptist Church of Eaton, and appear in the US Census of Eaton, Madison County.

Myles, was always called Myles by all who knew him, and took up the farm once owned by Adin Brown near Pierceville, living there for many years. Standish was an energetic businessman who invested in the Skaneateles Turnpike, and he built and kept the first old turnpike gate, which stood in the early years opposite the famous Alderbrook gristmill.  It is so interesting to see both national and local history meld seamlessly together this way.

So for a day full of History please join the Museum for its opening on Memorial Day Monday, May 30th from 11 to 4 pm.  Refreshments will be served and all are invited to travel back in time to our historic roots to honor our Veteran’s and our history.

Posted by Back Street Mary at 4:58 AM