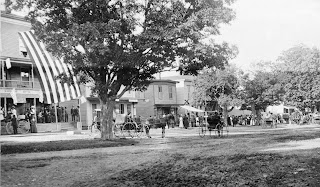 I realize that I have been tardy in getting some new history blogs out...but I have also been struggling along trying to beat cancer.  Yes, modern medicine may be able to cure you, but the side effects of the drugs effect every part of your body...including your ability to think and write.This week has been good for my brain and while watching the TV about the rising "White Nationalism" and Civil War era legislation with voter suppression .. I was reminded of an old story about Eaton.  The story actually revolves around the house next to the museum on River Road, the road that was once called Water Street. The building is one of the oldest in town and was owned during the period before and after the Civil War by the Leach family. It is "Henry" I believe who served in the Confederate Army while the rest of the town for the most part was pro North.Small towns in those days stuck together in a more cohesive way than today I guess... and after the War had passed, it is said that on all holidays and during parades old Mr. Leach would don his Confederate uniform and march in the parade with the many members of the GAR.  Both sides it is noted paraded up and down the streets with pride.  As a matter of fact... it wrote Mr. Leach into history and he has become part of the "Tales told of Old Eaton"... ones that you can enjoy.Curiously, when redoing the museum we held a very large opening day celebration... and Chris Staudt with whom I bought the building and refurbished it to become  the museum for Eaton... invited friends and family down for the occasion. Chris' dad came down and toured...after the crowd had gone home and as he was leaving, he looked up at the American flag flying over the door, he glanced across the yard to the Leach house and said... "You really need a Confederate Flg flying here also".  To this day I wonder if old  Mr. Leach was around giving us a hint of his past... could be I guess.... after all it was Memorial Day!

The concept of Eaton Day arose from Eaton's traditional 4th July Celebration which has been taken over by Hamilton today. In "the Old Days" it was a celebration of honoring the dead warriors, remembering the past and enjoying community, today Eaton's little history group has tried to keep that spirit alive on Memorial Day Monday by holding the museum open from 1-3 pm.

The group has officially become a recognized charity so all donations to it are are tax deductible. The museum is open on the First and Third Sunday's of the year until October  and we are currently seeking Docents who will help, or anyone interested in giving a hand.

Attached is a video I did  for last years Memorial Day honoring the many Revolutionary War Soldiers  buried in Eaton Village Cemetery.

Posted by Back Street Mary at 7:38 AM