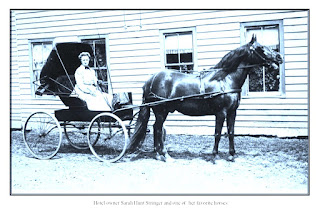 The stories of "Old Eaton" are numerous and some of the best were written by Harry Hart who acted as the local historian for many years.  Harry had lived through a good number of years and he had the confidence of Mrs. Mott the last owner of the Stone House who loaned him Morse family papers to write from.  One of Harry's stories gave me more information on the Lower Hotel, Samuel Chubbucks property that became Fred Close's Gas Station.  This was the site of the Famous Tower Gas Station and today is Eaton's Lighthouse Post Office. The Hotel was owned by one of Eaton's well known characters, Sadie Hunt. But I thought I would let Harry tell the story for me.

There are many stories about Sarah and as a friend told me recently, “The stories about Sarah are legend but I could vouch for none of them.”  There is one thing for sure she liked the hotel business and could tend bar as well as anyone.  It was
unusual for a woman to run a hotel in those days, but it was her business and the way she made her living.  She clung to her property through good times and bad times.  The coming of the prohibition era gave her a difficult time and she was hard pressed to make a living.  She went out picking peas to earn enough to live on, as indeed many others did. 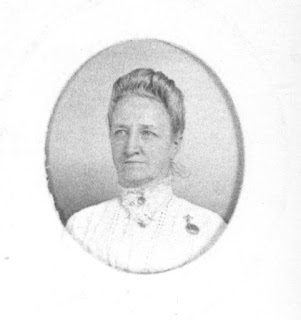 The following is a little story about her in the pea-lot of neighbor Eli Tupper.  There was a hired man working for Eli by the name of Frank Cook, or as he was more commonly known as “the Battler” by all the neighborhood kids because of Frank’s prize fighting ambition.  A great row erupted when he accused Sarah of not filling her baskets full and there were some choice words passing between them.  All the rest of the pea pickers looked and listened much to their great amusement.  Pea picking came to a halt for a few minutes!

Sarah had an unusual way of talking, such as, “Says I to him…., says he to me…., Says I to him it looks like a bad storm.  Says he to me, it appears so.”  When she had a full stock of liquor on the shelves she would remark, “Says I, that looks good to me.”

Now, Norm often took to sampling the stock and if it were early in the day, Sarah would object.  “Sarah,” Norm would say, “I want my tea I tell you!”

The following announcement was found in the Oneida Dispatch February 23, 1867, “Married in Georgetown by Reverend N. Mumford – Mr. Norman Hunt of DeRuyter to Miss Sarah Wood of Georgetown, New York.”

Sarah and Norman kept the hotel for about twenty-five years together while the Exchange Hotel changed proprietors many times during this period.

Sarah was already sixty years old when she married Will Stringer.  From all accounts Will was a very well liked man and the best trombone player in these parts.  The old porch on the old colonial style hotel made an excellent place for the Eaton band to play.  Here they were sure to gather and play on the Eaton Field Days, amid the sweat, the beer, and the cigar smoke, pausing only long enough to pour the spit from their horns.  The figures of the musicians were somewhat dwarfed by the enormous size of the hotel, but the music came forth loud and clear.  The Eaton folks were out for fun and fun they had on this special day.

Sarah in her younger days dressed very fashionably and she especially liked to drive her matched pair of road horses.  She had the carriage painted and shined up to a glass finish. There were many fancy plumes that were fastened up to the headstalls and above the horses back.  It was a sight to behold to see her driving up through West Eaton on her way to her parents home in Georgetown.

Mr. Clifford Smith Sr., or better known to all his many friends as “Kip” remembers seeing her as a youngster.  Kip can recall all these incidents and the local people so vividly way back then.  In fact he is the only person who recognized Norman Hunt in the Eaton Hotel photograph.  Norm is the man with the bell and hat in hand standing out in front of the hotel.

In Sarah’s latter years it was her practice to dress all up in her best clothes, usually all black, and walk around the square in Eaton for exercise.  The clothes she wore were ten or fifteen years out of date.  Nobody thought anything about this except to say perhaps, “There goes Sate this morning.”  She was a town character of many, many years.

The following story was relate d to me by Mrs. Matilda (Saunders) Pratt.  She and her family were residents of the village of Eaton at the turn of the century.  Her father, Leonard Saunders, often told this story about Sarah.

Sarah had one of the first automobiles around and she and her husband enjoyed riding about in their horseless carriage.  Sarah made the remark one day, “You know says I, my husband and I “driv” over to Hamilton to put some wind in the wheels.”