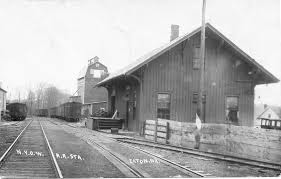 Still standing in Eaton on Route 26 is the old O & W Depot Building.

This unique structure has remained in place and in use, with a short exception, since its original occupancy. 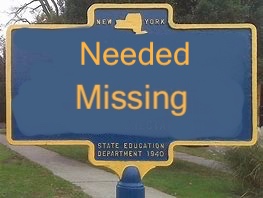 The building was erected on a piece of property considered one of the hamlet’s first farms, settled in 1794 by Levi Bonney. Bonney needs to be celebrated in a new NYS Historic Marker to replace the old stating that he was the first to come to this valley and stay. Some say he was Eaton’s first founding father and he claimed that he was Eaton's first abolitionist.

The depot is situated near the first road, “the Indian trail,” and by what became in the first decade of the 1800’s the plank road known as the Georgetown Turnpike and a stones throw from the Skaneateles Turnpike.  These roads were built by the Morses and the businessmen of the area and used to transport the early products of the area.

The Georgetown turnpike was used to link Eaton with the Chenango Canal. The hamlet itself boasted Madison County’s first creamery, cheese factory, and the county’s first distillery, which became the very successful Empire Bottling Works.  It was also home to the nation’s 3rd steam engine company, then A. N. Wood, later renamed the Wood, Taber & Morse Steam Engine Works.

As these businesses, with others, grew in importance, the necessity for better transportation brought about the need for the community to have its own stop on the railroad circuit.

The Midland Railroad (New York, Ontario and Western) was an important part of the Hamlet of Eaton’s business for freight as well as for passenger transport.  Nobody pushed harder for its building than Wood, Taber & Morse.  The company was swelling as a business and became what is considered the largest traction engine company in America by the 1880’s with it’s introduction of the first 4-wheel drive steam traction engine.

On January 11th, 1866, the New York, Ontario and Western was chartered, after much political pressure in the legislature to secure funding, on August 29th—the first passenger train was run on the main line for the purpose of transporting hop pickers.  It was drawn by Engine #4, with Edwin Williams the Engineer.

By October 20th, the last rail was placed in Eaton, and on that Wednesday evening the last spike was driven.  Mr. Ezra Leland, one of the first settlers of Eaton still alive, was allowed to fire
the first cannon blast to celebrate its completion.

Eventually, this site became the home of one of the largest milling companies in this part of the state, Moses and Cronk.

In 1957, the last piece of freight on the railway arrived; a ladder from Sears and Roebuck for Huber Cramphin.  When the train left so did the O & W service to Eaton.  It is said that the rail rise in Eaton was the steepest railroad grade this side of the Rockies.  The small rail station building is standing today.

Posted by Back Street Mary at 6:12 AM