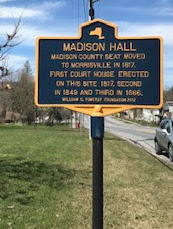 The courthouses of Madison County are steeped in the traditions and history of the county’s past.  The original Madison County Courthouse was erected at Cazenovia in 1810 and served the public until 1817 when the county seat was moved to Morrisville, a more central location in the expanding county.  The building of the Morrisville courthouse was overseen by Joseph Morse, a wealthy businessman and landowner from Eaton Village, which is located farther to the south in the Town of Eaton.  Other members of the group, chosen by the board of supervisors, were Capt. Jackson and Squire Elisha Carrington.  The first court session was held in Morrisville on October 7, 1817.  This courthouse rested on what is today’s scenic Route 20, then the Cherry Valley Turnpike, and was the site of the famous hanging of Abram Antone in 1823.

This wooden building was taken down in 1849 and was replaced with a more attractive Greek Revival structure.  The overseeing supervisor for this building was Joseph Morse’s son Ellis Morse, who had taken over his father’s businesses.  This courthouse building burned during one of the trials of the infamous Loomis Gang.  Many people have attributed the fire of October 11, 1864, that started on the second floor galleries, to the Loomis family trying to burn the documents and court papers in this case.  Legend has it that the village’s fire hoses were cut by a member of the gang.

An interesting side note is that the third courthouse in Morrisville, built in 1865 is still standing today and was supervised by George E. Morse the son of Ellis Morse-the third generation of Morse men involved in building Madison County courthouses.  This beautiful mid-eighteen hundreds building is set on the former building’s foundation, and is entered on the original stone steps of the old courthouse.  Now called Madison Hall, once a part of Morrisville College, it is used for public business and is listed on the National Register of Historic Places.

Posted by Back Street Mary at 5:09 PM