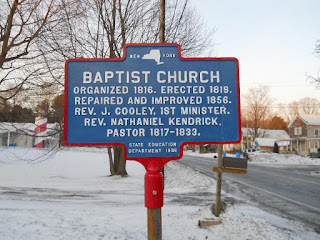 Today I started the Eaton Churches corner of our historic markers and realized what an unbelievable history old Eaton and its churches have. Most people do not realize that two of the original incorporators of the Eaton Congregational Church were also 2 of the 5 original incorporators of the Baptist Church as well as the Baptist Theological Seminary, the Hull Brothers.  This incorporation became Madison University and then today's Colgate.  As a matter of fact the Eaton Baptist Minister at that time, Nathaniel Kendrick became the first President of Madison University!

Not impressive enough..well the first graduate of the new school was Missionary Jonathan Wade of Eaton, a Baptist Missionary to Burma with Andoniram Judson.

That Baptist Church was also the home church of Morse and Leland families.  As Presbyterianism moved through the village, young men liked Reverend Andrew Bigelow Morse, the son of Ellis Morse and grandson of Joseph Morse, turned to missionary work.

In 1849, at the early age of nineteen, Mr. Morse was graduated from Hamilton College in Clinton, where his ranking as student admitted him into the scholarship roll of Phi Beta Kappa.

After two years’ experience as principal of a Young Men’s Classical Institute in Albany, N.Y., he entered the Princeton Theological seminary, where he was graduated in 1864.  After another two years, part of which was spent in post-graduate work in New York and a part in the service of the church, he and his young wife, commissioned by the Presbyterian board of foreign missions, started for Siam.  This was the goal of their ardent ambitions and consecrations.

Once in the field, he threw himself whole-heartedly into the work, but within two years Andrew’s health was shattered and he was ordered home. He continued working for several years on a literary work of permanent value.

Because of his poor health during the Civil War, he was exempt from military service and debarred from the Christian commission.  So instead, he spent three years at Washington in the Treasury Department, ministering often in hospital and barracks.  In Washington he served in the somewhat famous “Treasury Guard” of which he frequently spoke with a smile.

It is here he also became acquainted with many men who afterward became famous.  Among these was the one whom he always mentioned with a great admiration and reverence – the distinguished martyr President Lincoln.

Andrew takes his place of honor with the other young men of Eaton who also went to Siam (Burma) and China, Jonathan Wade and William Dean. **Newspaper stories filled with letters sent back to Eaton from Siam still exist in the Old Town of Eaton Museum today.

Eaton's 2nd Baptist Church was home to the family of  Emily Chubbuck -"Fanny Forester" who married America's famous Baptist missionary Adoniram Judson and returned to Burma with him as a missionary! After her marriage to Judson she and he returned to Eaton where he preached a special service.

In its "hay-day" Eaton had 3 churches with a population of about 450.  These churches remained in the community even though they became "Federated"as church going declined....

Eventually, the 2nd Baptist Church building was sold and torn down by Arthur Yale, a postman.  Industrious to the core Arthur used the building pieces to build three cottages on the Bradley Brook....I have a copy of one of the cottages using the wood, roofing, and pews from the church in the museum. I also have the only copy of the Historic Baptist Churches records, the original is preserved at Colgate.

Posted by Back Street Mary at 7:46 AM