A special history, a Stray, and Winston Churchill's love of Cats 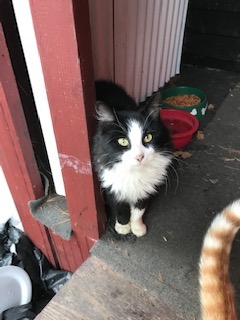 Thanksgiving and Christmas time always remind me of home...and with may new porch boarder I thought about my family home and a famous cat called Jock.  The stray that showed up on my doorstep is obviously not a feral cat...he is older..longhair...and super friendly and wants into my house.  I have put out Facebook requests for help since I know he belongs to someone, but so far no luck.  I can't keep him as the stray population that I have been caring for is at its limit and my only house cat Rascal would not tolerate an addition...so if you can help let me know at backstreetmary@yahoo.com...

But here the story of home and a famous cat called Jock!

Winston  Churchill’s mother was Jennie Jerome, a beautiful American who actually has great ties to CNY.  The Jerome Family farms were in CNY and the land that my family built its house on was part of the Jerome Farm…home of Jennie’s grandmother.

Thoughts of the Jerome farm led me to ponder the fact that for Christmas one year I gave my brother the gold watch dad had given me...he had found the old gold watch in the family garden as a young man...a garden that would later become the family compound of homes.  Repaired and running, I thought it was a great family history piece and a great present.

Churchill was supposed to come to speak at a family reunion in Syracuse once, but had to turn back because of the presence of U Boats...he did send a telegram to the family group assembled…a piece of history I learned from the Wood-Eaton sisters who visited me years back in Eaton.  They were relatives and were to be at the reunion and remembered the trip.   They had come to Eaton to visit their great grandfather Allen Nelson Wood’s house, the house I live in.  Isn’t it strange how life is full of so much serendipity?

Mr. Wood was named Allen Nelson Wood...Nelson for Lord Nelson a hero his family honored with the name for many generations…and then suddenly my grey cat Rascal jumped in my lap…hint …one o f Winston Churchill’s most famous cat’s  (grey) was named Nelson to honor Lord Nelson.

Churchill was a cat lover, actually an animal lover.  Winston and his wife Clementine signed their love letters to each other with little drawn pictures…he a dog (Pug) she his cat...and their daughter the PK or puppy-kitten.

His cat stories are famous and many can still picture him speaking with a drink in one hand and the grey cat next to him. One story I love is... after one of his famous speeches (he had a lisp as well as drank) a woman MP in Parliament said, “Sir, you are drunk!”  His replay was “Madame that may be true, but in the morning I shall be sober whereas you will still be ugly!”

His favorite cat in later life cat was a ginger-marmalade colored cat he called  “Jock”, named after Sir John Coville his secretary who gave it to him.  Churchill loved the color and the cat so much that after giving his home Chartwell to the National Trust… he stated in his will that it should always have a ginger colored cat in residence…and to this day it does…and always named appropriately “Jock”.

Great piece of history...please help find this new stray cat a home or its owner!

Posted by Back Street Mary at 9:20 AM