Memorial Day the Weather and Our Lady of Fatima rolled into one! 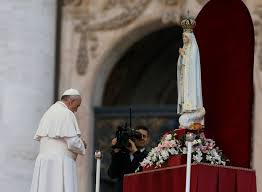 This week of unbelievable turmoil politically, has been made even drearier by the rain and unusual cold in Eaton.

Our little group of workers have continued toward our goal of getting things together for our upcoming 22nd “Eaton Day” on Memorial Day Monday.  The old Auction Barn on Front Street (Rt.26) next to the Post Office is being painted for the occasion, (thanks for its use Jim Monahan) and the bakers, seamstresses, and even this writer has been getting things together.

In the midst of this I picked up the calendar and realized that today was May 13th..2017.  Now to some this is just another day, but to me from good old Solvay… it brought back a small vision of the church I attended as a child… The basement the church had a “Grotto” of rocks dedicated to Mary…who I always believed was Our Lady of Fatima.

The story was one I knew from childhood, by coincidence or by reality, the Secrets of Fatima seemed more relevant to me today, than any time in the past especially with news of this
week..

The story started on a hillside in Portugal in 1917 where three children tending sheep belonging to their family were greeted one day by an apparition… many call it the “Angel of Fatima”. The Angel appeared to them to foretell that the Blessed Mary would appears to them on a specific date...  which the children said she did.

The children were at one point examined by the authorities that of course thought they were making it up or seeing things.  As their stories of the apparitions and the Lady words that they were told reached the public… it caused 20,000 people to take a pilgrimage to the hillside in Fatima on the day specified for the “Lady” to appear again.

That day after a dark stormy interval, an unearthly sun danced in the sky above them, the sphere looked like a disc in rainbow colors as it zigzagged across the sky… miracle cures occurred some claimed.

Two of the children who became resolute followers died very young during the outbreak of the horrible flu epidemic of 1918.  One… Lucia, the eldest lived, to be 95 and wrote books on what she saw and what the Blessed Lady told her.

This year Pope Francis was in Fatima for its 100-year celebration and to declare the children Saints.  The trip was much like the other Popes before him had done in different capacities. Of interest…Pope John Paul who was shot on a May 13th brought the bullet to Fatima, and placed it in the crown of the statue of the “Lady”… he believed Mary had saved his life.

The three secrets told to the children were predictions of what awaited the world unless it changed.  Written down by the third child, Lucia, who became a nun, the third secret continued to be sealed and tucked away from the World until opened by Pope John Paul.

The first two were predictions of the coming if World War II, noting the rise of Fascism even predicting Kristallnacht—the "Night of Broken Glass.  in Austria as the start.

The third secret or prediction…released on 2000 I copied verbatim here….”

[Russia] will spread her errors throughout the world, causing wars and persecutions of the Church. The good will be martyred; the Holy Father will have much to suffer; various nations will be annihilated' (13-VII-1917)”….

The Lady basically said we needed to stop our hatred... our persecution of religions... to act as one and to come together..for there to be peace on earth.... Much to think about in today’s world huh!

On  a lighter note…. please come out to our event on May 29th, Memorial Day Monday…. celebrate community and take a pie or gift home as a way to support history and goodwill among neighbors and men.

Posted by Back Street Mary at 5:46 AM