More History on the "Old Madison County Home" a highly rated facility in its day! 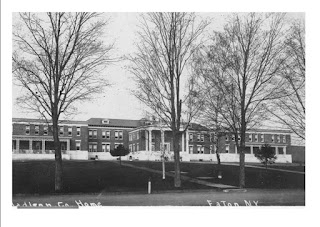 What a week!  The weather has been nasty this weekend with wind chills in the minus range.  So once again stuck indoors I decided to catch up on some history.
Since so many have thanked me for information on the Old Madison County Home I thought I would add more to the story...
The original site of the Home was a stone farm with many stone buildings including a stone hop house.  These structure probably pre-dated the 1806 Madison County forming.  The picture below in color is the "Home" made up of three sections that were joined.  Behind the building were two story outhouses.... The brick building that is still standing today was built after a fire...story below!
FIRE
It is on October 23, 1913 that the next chapter in the “Poor House Story” begins. One of the Curtis girls, who was musically inclined, left the building early as she often did to teach a music lesson. Once outside, she noticed that the building was on fire. She ran into the building and alerted those on duty and rang the bell sounding a call of alarm to the sleepy village above.
Though helped arrived from every corner of the county, the building turned into a raging inferno and burned to the ground. The pictures that we have of the “Home” at this time are directly related to the quick thinking effort of one of the help that threw her trunk of belongings out a window and who called for someone to come and take it. Other than that “All was lost.” 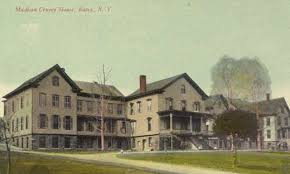 From Mrs. Partridges booklet on the Infirmary dated 1878-1979:
“Although it was never proved the fire was thought to have started in the lavatory of the men’s dorm in the wiring. A few days earlier electricians had been making repairs there.
One elderly resident reported having seen blue smoke there behind some of the plumbing but was not aware he should report it.”
The fire actually caught the roofs of a number of town homes ablaze.
It is recorded that men were housed in an adjacent building while the sick, women and children were put up in homes in Eaton Village until the building was completed.
All in the community helped to keep the many people involved in this terrible tragedy safe and cared for.
The Alms House fire of 1913 and the death of S. Allen Curtis left an amazingly large job for the next superintendent of the poor. After Curtis’ death, Lew Burden was doing the superintendent’s job.
After the fire, however, Republicans were pushing heavily to have Lewis Close of Lebanon made his successor. (An interesting note: George Lathrop who had been S. Allen Curtis,’ assistant and he married one of Curtis daughters.)
The new “home” was to be made of brick and arrangements were made to start the project immediately as the former and new inmates were being housed all over the village and in temporary quarters on the grounds. The new project was to be completed in two years, and it was!
One if the still standing early stone structures in Eaton New York, now empty!