The Memories, with thoughts of History, Community & the Future! 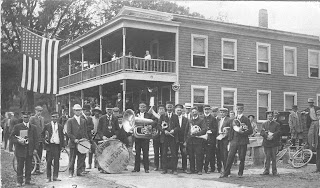 Today here in Eaton we say Eaton Day or “History Day” as we originally called it and celebrate it on Memorial Day, but for many years it followed the tradition of a “community day” every year on the 4th of July.  Today of course, Hamilton has stolen the 4th as their big day… but in the past it was Eaton’s Day and people came for miles to strut their stuff and catch up with the community and it people.

In those days the event even included horse racing at breakneck speeds through town and across.  The local stable was a noted hang out to “star” horses and one of its ‘overnight” guests was the incredible horse Dan Patch.  Flora Temple once graced the small paddock on what was then the Hamilton Skaneateles Turnpike, a road whose cost the Morse family of Eaton half paid for in 1811.

The Eaton Band and the Military Band beat the drums and blared martial music as the merchants (then many) put out their wares. The bandstand was located next to the place we hold Eaton Day each year on what was then the Skaneateles Turnpike today’s route 26.   The spot we set up is actually the spot where Samuel Chubbuck invented the key and sounder for SFB Morse’s Telegraph!  It is his equipment that sent the first message. Chubbuck’s father was noted for running a hotel and more than one Tavern. 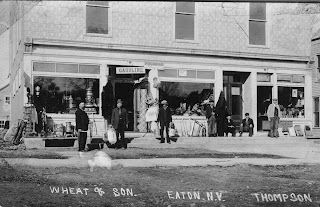 The ladies aid put on supers and the lunch business thrived.  A dance and suppers were often held in the Masonic Hall, a building that is dilapidated today but still standing in town with a roof that once extended over gas pumps.

The ladies of the churches put on meals for visitors… and their famous preachers including Grover Cleveland’s brother, and Nathaniel Kendrick… would have tried to tone down the activities. One of Eaton’s historic churches still stands with its historical marker out front. Families of the Churches would have included the famous missionaries to be, Emily Chubbuck Judson, Jonathan Wade, Andrew Bigelow Morse, and more.

Wood. Taber & Morse's new Steam Engines would be there in front of the factory...all shined up ready to impress, Melville Landon "Eli Perkins" might be up from New York or Washington to summer and relatives from far and near would return to enjoy the community they sprung from.

Gone is Davenports Store that was noted for its wares and for its owners who were loved by the population and were successful for many years.  That store is still standing is now a residence with its large white pillars on the side…. not in the front!

Paddy Miles firing not a cannon but his anvil for many years jolted the town awake.  Yes, an Anvil…. that had a hole in it where black powder was poured and a fuse lit.  Today we have Jim Monahan and his cannon crew who dress in Revolutionary War era costume and fire a real cannon on occasion.  This tradition being brought down since the majority of founding fathers served in the Revolution.

And for the holiday itself, the Eaton Cemetery is spruced up and over 200 flags grace the graves of men and women who served their country in all conflicts of the past including some that were at Bunker Hill, Lexington and Concord.

Old times and memories to be sure, but pieces of history that should be celebrated, and people who should be honored for their service in this the 221st year of the community.  In order to protect their history and the artifacts that remain… we the Friends of the Old Town of Eaton Museum... beg you to come out and enjoy the day. Talk to each other, eat, get involved in the raffles, bake sale, white elephant sale… join the "Friends" and support a museum that preserves the history of the area and the “Community.”

Future generations will thank you for it!

Old Town of Eaton Museum
Posted by Back Street Mary at 1:11 AM