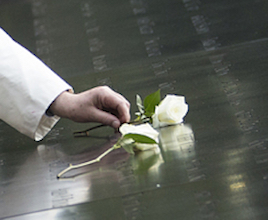 Its been a busy week here in Eaton as we are finalizing plans for our upcoming “History Day” on Memorial Day Monday…now called Eaton Day.  As an added side to the event we have decided to hold a “White Elephant” type of sale with new and used items in an attempt to bolster the sales on the day that raises money for the upkeep of the Old Town of Eaton Museum.  We decided to call it a “White Sale" of sorts.

With that in my mind, this morning while looking through Facebook, I saw a white rose picture put up by someone to honor their mother on “Mother’s Day!”  It reminded me of a very interesting history story on Pope Francis.

Pope Francis has a special devotion to Saint Therese who said that when she got to heaven she would shower white rose petals down as a sign of her intercession when prayed to.  So the white rose is a sign to him, a sign from heaven.

When he was in Buenos Aries he had to solve a number of important problems and says he would pray to Saint Therese. “Whenever I have a problem,” Bergoglio explained  “I ask the saint not to solve it, but to take it into her hands and to help me accept it and I almost always receive a white rose as a sign.”

Saint Therese... who is one of the most popular of the Saints of the Catholic Church, is often referred to as the “Little Flower.” Her approach to having a spiritual life was both simple and practical.  Pope Pius the X called her "the greatest saint of modern times”.

The Pope’s belief in the saint is pulled from a quote of hers before her untimely death at the age of 24, Saint Therese said,  “A soul inflamed with love can not remain inactive...  If only you knew what I plan to do when I’m in heaven … I will spend my days in heaven by doing good on earth.”

Most recently it was reported that before World Youth Day the Pope prayed to her for her intercession…. and that randomly, while taking a walk through the Vatican garden he was handed a white rose by a gardener working there.  Pope Francs took this rose to be a sign that she was interceding on his behalf... especially since in 1927 Pope Pius the XI had made Saint Therese the Patroness of the Gardens of Vatican City.

So in 2014 to honor both the Saint and Pope Francis, Croix Dominique and Jacques Ranchon, horticulturists from Bourg-Argenal in the Loire region, developed the new white rose and asked permission to name it Pope Francis.  They also donated 50 of the plants to the Vatican garden, one bloom of which was given to the Pope in his walk.

Be sure to join us for our special White Elephant Sale on Memorial Day Monday and for all you Mother’s….Happy Mother’s Day!

Here is a the story of the Saint!

Posted by Back Street Mary at 6:55 AM