Thanksgiving, West Eaton Cemetery and a piece of history on the Larchmont Shipwreck! 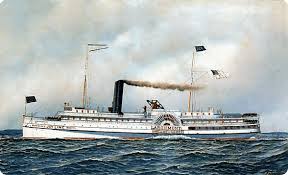 Quite a week here in Eaton as a warm spell brought out people scurrying around outdoors to do the jobs they missed earlier.  Thanksgiving proved to be a beautiful day, warm and balmy, a wonderful boon to the local travelers.

The old house in Eaton housed a small Thanksgiving gathering for museum members those who wanted a place to gather, eat and enjoy each other’s company.  Myself I was happy to have the company and it seemed we all shared the duty of cooking, cleaning and of course, there was too much food. 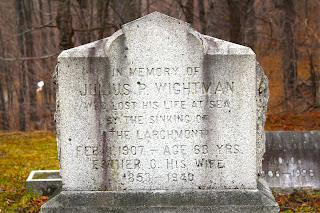 After a walk on Friday a few of us visited the West Eaton Cemetery so Barbara could visit her husband’s and his families graves, and it was there I spotted a cemetery stone that interested me.  The stone read that the person laying beneath the sod and died in the sinking of the Larchmont.  This as usual peeked my curiosity and I was off on a “History Quest”!

It seems the Larchmont disaster of February 11, 1907, was considered by many to be the Titanic of the eastern seaboard as the steam driven side paddle wheeler sank in 15 to 20 minutes taking over 150 people to their frozen watery deaths.

The 23-year-old Larchmont was a wooden, side-wheel steamship that was 252 feet long by 37 feet wide and was painted white with two tall black smokestacks. It left Providence, Rhode Island at 7 o’clock en-route for New York when a terrible winter storm soon struck causing waves of over 20 feet high and reduced visibility. The Larchmont and coal schooner the Harry P. Knowlton collided in this blizzard only three miles from Watch Hill, Rhode Island.  It was reported that the two ships maneuvered to avoid collision but maneuvered the in the same way causing the Knowlton to strikes with such speed and force that the Larchmont’s fate was sealed.

The collision occurred just after the Captain of the Lachmont (who was only 27) had left his post to retire for the night, Since the passengers were in nightclothes, many in their cabins below deck, they had little hope of surviving temperatures that were zero and below with up to 60 mile per hour winds.

The Captain of the Henry Knowlton who separated from the Larchmont saw no lights and assumed the ship had sailed away for help, he himself attempted a run for the Block Island beach to beach the craft which eventually happened causing the Knowlton to be dashed and splintered by the ferocious waves. 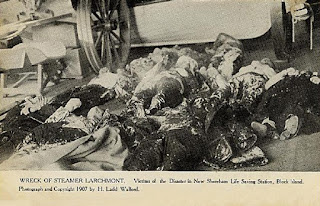 There were approximately 150 passengers and crewmembers on board although the exact number and names will never be known since the passenger list went down with the ship.  Of that number only 17 people survived. Seventy-four ice-encrusted bodies were washed up on the beaches of Block Island and were shipped home for burial including obviously, Mr. Wightman. The remainder either went down with the ship or drifted out to sea in lifeboats, never to be seen again.

I guess Mr. Wightman had become somewhat famous for being onboard the “Titanic of the East” and so because of this it was noted on his gravestone.

Another piece of local history and lore, interesting history brought out by a stroll through a cemetery.  An unusual way to learn it!

Posted by Back Street Mary at 3:50 AM