That Field of Dreams feeling, stepping into the past and losing your troubles for just a moment in time! 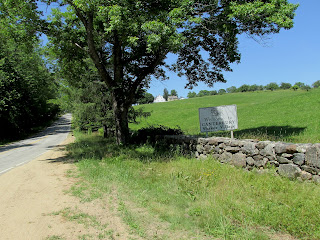 This has been a busy week… though I actually took time to take a mini vacation mixed with work… the first in 6 years.  Only 48 hours or so long, it managed to do something special to me, something I will always remember.

The trip was business in a way…and payment to a volunteer helper Barbara Keough… who had become enamored by the Shakers after viewing a video I owned by Ken Burns.

Ironically, the story of this year’s speaking engagement was on William Pryor Letchworth and the Shakers played an important role in his work, so I had planned to do this year’s lectures on the Shakers.

To prepare for the trip I had bought Barb a wonderful (used) book by June Sprigg called “Simple Gifts”.  It was a charming look at her college summer job for three years as a tour guide at Canterbury Village in New Hampshire.

The summer was magical for her as she became an adopted “granddaughter” in a way, of the old Shaker woman who were left and who had opened the village officially to tours as a way to educated and to preserve the rich cultural heritage of those that toiled before them in the religious sect known as The United Believers in Christ’s Second Coming…better known as “Shakers”.  The women lived in a belief that June not only came to understand, but also came to accept in an enlightened way…though not becoming a Shaker.

As she described her arrival at Canterbury Village and her view of the dusty road that led to a place that had once been a vibrant community of “Believers”…working, living, and dying in their beliefs you fell in love with Canterbury yourself.  That summer she came to understand herself and what she longed for…her “Spiritual Awakening” you might say.

As a novice guide she worked with a young man of only 13 who was the tour guide the previous year.  His father worked as a caretaker for the community and lived with his two boys in the village… it is his father before him who took people through and explained the Shakers as well as Canterbury’s history to visitors for many years…The young man's name was Darryl…someone she had become fast friends with even though he was younger.  It seems anything she wanted to know about the Shakers he shared with her, knowledge he had gained as having lived there at Canterbury for much of his young life.

The day we arrived, we were a bit hot and tired since we had gotten lost and were running behind schedule. But as we approach the village... June’s words seemed to come to life…there before us was the dusty road with a clearing at the top of the hill… lined with white and colored clapboard built structures dating from almost 200 years ago!

We bought our tickets and just caught a tour that had started a few minutes earlier.  We walked to a grove of trees where the guide gave us the story of their plantings… it seems each tree was planted by a child who lived in the village and it was their responsibility to water and nurture it… the one we stood before he said was his. 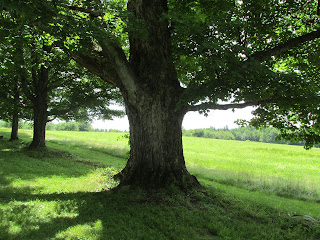 At that moment… like in the movie Field of Dreams…” all the cosmic tumblers fell into place”…Darryl of the book was our tour guide…but 30 years older.  As he spoke with so much love and knowledge of the women who in the book he called his “grandmother’s”, he made you part of that love and of their story.  His history knowledge of the Shakers was enormous and he was a fascinating speaker and guide.

As he closed the tour and left us to wander and explore on our own… he stepped out the building’s side door.  I followed him and called him by name asking him about June Sprigg who he said was now a librarian at Berkshire College. He said she was a wonderful writer…I said, “I know”. We spoke for a while of the two new Shaker converts at Sabbath Lake Maine.

As we ended our conversation, I thanked him and said that I was so glad he was our tour guide.  He smiled and put out his large warm and firm hand for me to shake.  With his touch I felt I had been transported back through the years and knew all the people who had come before…  I was now part of them and the pages of their dusty and once glorious past.

Now as I write this I have a feeling that perhaps I left a piece of me there at Canterbury Village… in the past…now a part of it... I wonder?

***Barb and I have visited a number of Shaker Villages that are now being restored and the Hancock Shaker Village, which is in my opinion too commercial.  So I recommend if you want a trip into understanding and wish to see a Shaker Village, visit Canterbury.  It looks and feels as if the Shakers just had just left it there for us to find and become part of.

To make the trip complete… read the book “Simple Gifts” by June Sprigg… perhaps Daryl will step out of the pages of it to take you on a trip back to a much more simple time….

Here is a quick video I did of our trip... enjoy!

Posted by Back Street Mary at 3:16 AM