Beer, brewing, April 29th in history and a man who supported women's rights in the mid 1850"s. 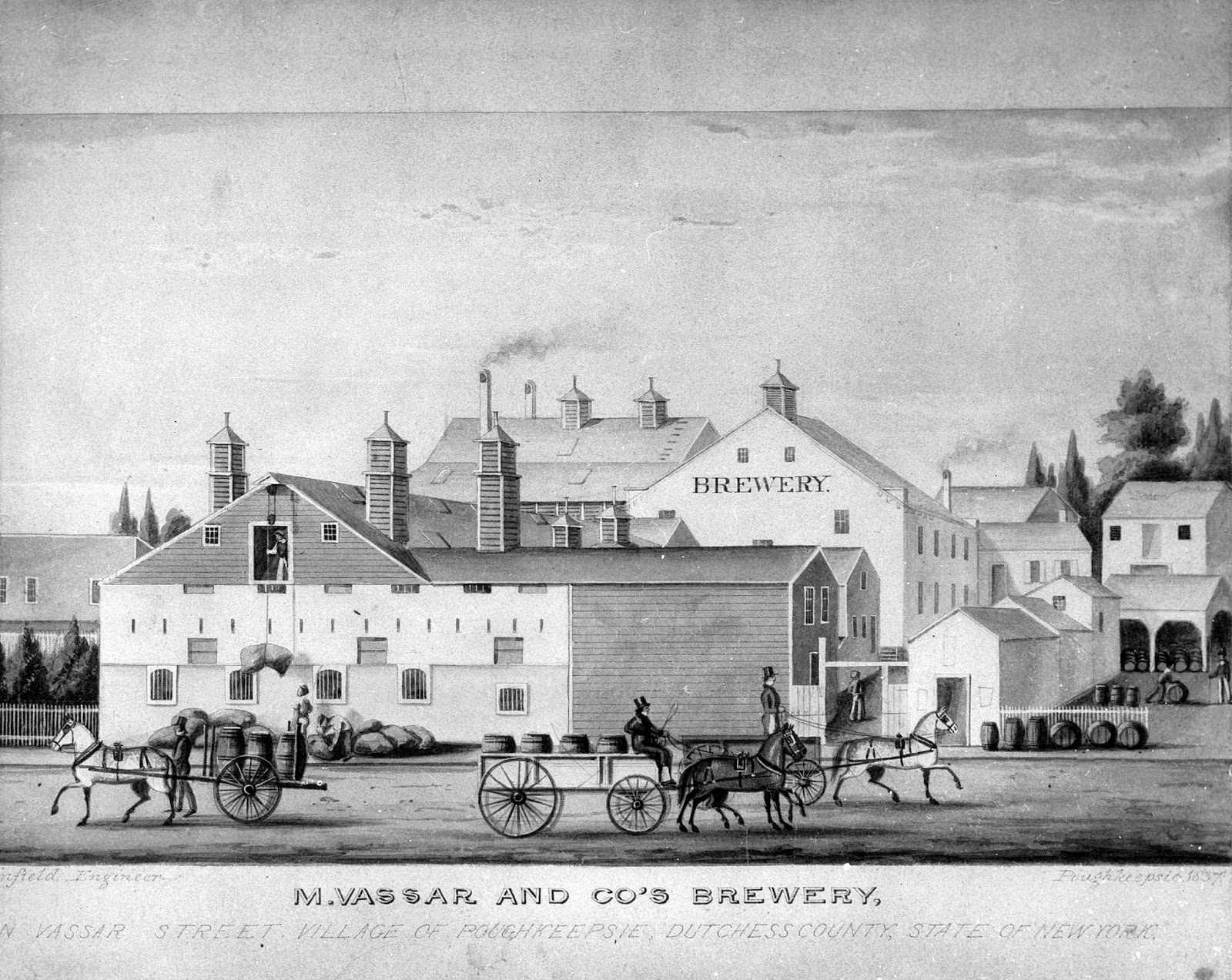 What a week… more SNOW and cold… so, next to the wood fire I took some time to look back on history…and as usual I found some interesting reading.  It pertains to a little book we are putting out for our May, Memorial Day special... since it is the 220th Anniversary of Eaton’s founding.  The date that I was interested in is coming up this week... April 29th, 1792.  It stood out as born on this day in history in England was a lad named Matthew Vassar who became a beer mogul of the 1800’s. Yes BEER mogul!

A few years after his birth his family move to America to seek some religious freedom with entertained thoughts of starting a beer business… since both Matthew’s father James and his brother Thomas were English “brewers”.

The two bought some land on the Hudson near Wappinger’s Creek, but it wasn’t until Thomas returned from England with English barley that the family began to brew ale.

As he grew Matthew did not want to be a tanner, the trade his father chose for him … so he ran away from home to make his own “fortune”.  After many jobs he became successful enough to move back to his family and start making beer with them.  The Vassar Brewery in Poughkeepsie became a large concern whose success was interrupted when fire destroyed the brewery and Matthew’s father was killed by fumes when inspecting the damage.

To make a long story short, after much trial and tribulation, Matthew became rich and began a climb that went from owning a huge beer business to incorporating the Poughkeepsie Savings Bank in 1831 in which he took a prominent lead, and the formation of the Poughkeepsie Whaling Company in 1832, of which he was a subscriber/shareholder, and a director and a trustee of the young city of Poughkeepsie.  He also ran to a brick making business and in 1842 took on the development of the Hudson River Railroad to get his beer to New York City when the Hudson froze over.

When a step-niece, Lydia Booth,  move from Virginia to New York to take the reins of a women’s Seminary school in Poughkeepsie… he helped support her and at that point became enlightened about the importance of education for females.

After a trip to England and noticing buildings donated with the donors names on them as monuments to them, he decided that a female educational institute would be the perfect thing to put is name to…it would be a lasting honor… So he did… he founded Vassar College… at that time for women.

Not only did he donate close to $500,000, in those days a vast sum, but became intimately involved it its construction and hired Maria Mitchell the astronomer as its first professor.  He toured Europe to learn about women’s education and even gave his house and art collection to the new college which, opened in 1865 to 353 young women.

When he decided to retire as head of the Board of Trustees for Vassar in 1868, and while delivering his farewell speech to the board, Vassar collapsed and died.  They placed him in a chair and after a short silence… one of the other men read the finish of his address as follows…

“And now, gentlemen, in closing these remarks, I would humbly and solemnly implore the Divine Goodness to continue his smiles and favor on your institution, and bestow upon all hearts connected therewith his love and blessings, having peculiarly protected us by his providence through all our college trials for three consecutive years, without a single death in our Board or serious illness or death of one of our pupils within its walls. Wishing you, gentlemen, a continuance of health and happiness, I bid you a cordial and final farewell, thanking you kindly for your official attentions and services, not expecting, from my advanced years and increasing infirmities, to meet with you officially again, and imploring the Divine Goodness to guide and direct you aright in all your counsels and social business relations.”

April 29th, his birthday is still today celebrated as “Founder’s Day and the college  (now coed) is a major success.  Its main President, John Raymond who taught at Colgate, was married to Cornelia Morse of Eaton and the Morse family girls attended, taught at, and left money to this cause…more on this later…

PS (Maria Mitchell’s secretary and assistant was one of them.)  I love it when history leads you from one place to another close to home and old Eaton.

Posted by Back Street Mary at 2:20 AM