A giant of a man, a Quaker, and humanitarian...one of my favorites - William Pryor Letchworth! 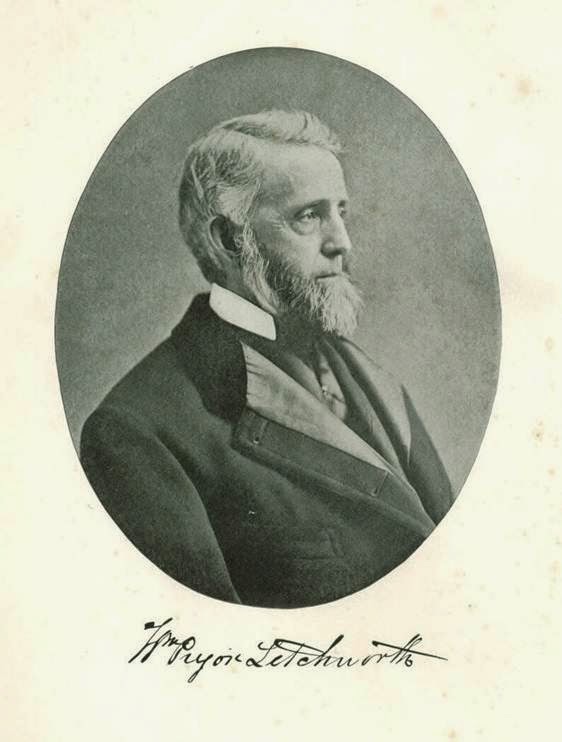 This past week I was supposed give a lecture on one of my favorite people…William Pryor Letchworth.  I’m not going to spoil that here as it is rescheduled for the last Monday in March in Solvay at the Library.  But I am going to touch on a subject that is dear to my heart in the dog eat dog…money, money, society that we currently live in.  Retirement means going to Florida, getting a summer place and a wintering place, travel, looking to a warm wonderful time for those with money.  But William Letchworth set up an example that I think we all should follow if we are able to.

Letchworth was a Quaker who as a boy wanted to runaway from home because he had read some biographies of successful men who made themselves rich after running away from home…a childhood fantasy.  So his father got him a job at 15 with a company in Auburn, NY and he worked until he was 50 years old…day and night…weekends too...and became rich.

He decided he was rich enough and needed a summer place to invite his influential friends to…which started him on a crash collision with history.  He followed his retirement by saving much history...(Indian artifacts) until he decided to do something for society…something to help people.  This career took him to new heights...he became the head of Charities for New York State and worked endlessly (without pay) to remove the children from the poorhouses and insane asylums where orphans were often placed.  He succeeded…and then he became the champion of epileptics.  In his run in charity and welfare work he was head of the board for 11 of 25 years.

He wrote the most important book on a subject that up until that time had little information of a medical nature, epilepsy… traveling at his own expense to Europe to learn more. For his book on the subject and was awarded an honorary college degree for this book… although he only had a Common School education.

He and fellow supporters eventually won New York State’s attention and received about $200,000 to find a suitable place to house epileptics; a place to train them for future life, a place to learn about the disease, and a place care for them.  This place called Craig’s Colony for Epileptics served New York State for many years and helped to bring an understanding of the disease, which, up until then many thought was mental illness, to the front.

All this with the money he made before he retired…

Most of us know he donated his land and home to New York State as a Park…but few realize he stated out ready to donate it as an orphanage, another of his pet projects.

The park has served many purposes though the years including becoming a CCC Camp…but in essence when we visit it we should look at it not as a park... but as a monument to a man who retired to become GREAT!

Posted by Back Street Mary at 1:29 PM