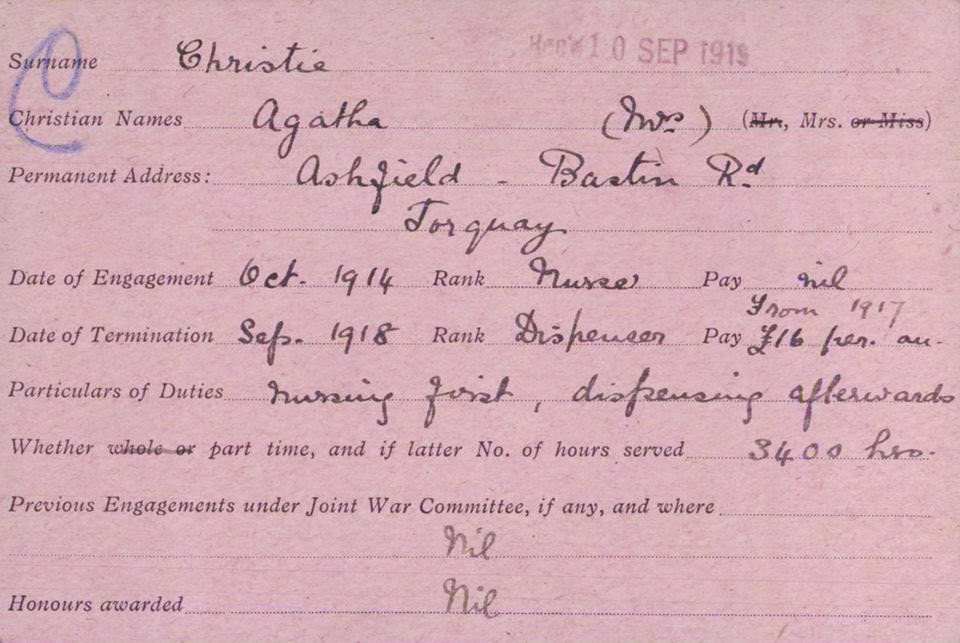 I was going through my Internet posting yesterday and came across one sent by my "almost a cousin" Emma Messere who works with the Red Cross in Italy. The post was from the UK asking for volunteers to help transcribe WWI card information on Nurses who served during that time.  The picture furnished was of a woman who had served at the hospital in Torquay, England.

Torquay had been a spot on the English coast that was a favorite spot of the wealthy because of its warmth and location near warmer waters.  I realized ...ah, yes Torquay...once home of one of my favorite writers as a young person.

As I studied the picture I realized that the card was the registration for that person ...Agatha Christie.

Agatha Christie was resident of Torquay while her husband was in the service and she indeed had served as a nurse and as a worker in the dispensary where they mixed potions and medication.  As a matter of fact she hated the mixing of medicines as she had nightmares of making mistakes.  This service did her a favor however, working there she learned about poisons.

My favorite of her characters was Miss Marple and I love and use Miss Marple’s wisdom that I believe to be true...that there are only 30 “types” of people (personalities) and they keep repeating themselves with each new person you meet.  Though with today’s cookie-cutter society I have narrowed in to 15.

Christie’s love of travel, something she had started as a child with her mother, and which she continued with her husbands, brought her to many locations and allowed her observations of different people that would lead to a career that would make her one of the world’s most prolific writers. …And interestingly enough…there were over 80 poisonings in her books…information she gained in her service as a nurse and dispenser of drugs in Torquay.
Posted by Back Street Mary at 4:14 PM