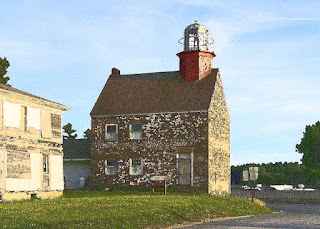 The first day of summer has caused me to be very depressed.  I swore to myself that this year on the first day of summer I would be at Lake Ontario visiting my favorite landmark the old Selkirk Lighthouse.  This is also the place that a close friend and I want our ashes spread.  Hers are there now.....and I need to visit.

As children and as an  adult I have spent many summers on the beach near by and there so many memories of those family trips still come to mind... from fishing to sailing!

Tourists occasionally wander down to the marina at the mouth of the Salmon River and discover this old landmark that  looks like it dropped down from a time of sailing ships and double-masted schooners... Listed on the National Register of Historic Places, it still stands towering above the water with a near by a shell of the old hotel where sailing ships docked, and guests stayed in the hot summers of the past.

Built in 1838, this venerable relic has one of the few “bird cage” light surrounds left on Lake Ontario. Costing the United States Government seventy-five hundred dollars, the building escaped the renovation of many of the lake’s lighthouses because of being scheduled to be decommissioned (which it was) in 1858. It was built because many thought that by putting a lighthouse near the lake in what was considered a dangerous area known for shipwrecks, and by dredging a deep channel in front, it would become a large port, which it was for a while.

Unfortunately, its neighbor Oswego to the west took its business because of its link to Syracuse via the Oswego River and Canal.

Today, the port is just a sleepy reminder of a by gone era, except for fall when sportsmen arrive for the Salmon run which has replaced the Sturgeon fishing of the past.. In the old days the lighthouse would dock Great Lake schooners, allowing the local area to receive and send goods of all varieties.

It’s most notable cargo however, few know about, even though a segment mentioning it was on the television show West Wing. In this episode Leo McGerry reminds everyone that it is cheese day and relates the story of President Andrew Jackson receiving a huge cheese and having it set in the White House’s main room, threw the doors open and invited the public into “their house” so that every citizen could share in the bounty.

The cheese that is recorded to have weighed over 1,400 pounds was made near Sandy Creek by Col. Meacham and was transported first by sets of gray horses to Pulaski and then on to the port where it was shipped via schooner and the canal system to Washington, D.C. The man who made it, Col. Meacham, was noted for his showmanship. The Colonel also made 500-pound cheeses fro the Vice President and the Governor of New York.

The hotel next to the Lighthouse ran for many years and was noted for its German Cuisine and dances. This building is now just a vacant and broken remnant of a time gone by when ladies and gentlemen summered by the lake.

I love sitting out near it in bad weather since it is a spectacular place to view an upcoming storm and last night would have been a great place to view the large full moon!

I always dream of  renting a room in the lighthouse for the night and enjoying the light at night which is now a solar light with the lighthouse was recommissioned in 1989.

Today it once again acts as a useful navigational marker and a marker for the different parts of my life which I hope to get back to if I can ever get this museum roof project done!  Go and visit it and tell it I sent you....you will be glad you did...really!

Posted by Back Street Mary at 3:06 AM