This has been an interesting week that was quite boring with the weather cold, windy, and damp.  So bored that I decide to finally write an article I started work on a year ago about Schiller Park in Syracuse.

The park is one of the largest encompassing 37 acres and its history is a varied as the many activities that are available to the public there.  The park was originally bought as a cemetery in the mid 1800’s and was to be St. Cecilia’s Cemetery, which never fully materialized.  After a legal battle the buried remains were eventually removed to another cemetery.
One of its main features is a round hill that was thought to be a Native American burial site gravesite and for many years the park was called Round Top Park. The park was used much with swimming pools, walkways, picnic tables and was especially loved for its panoramic view of Syracuse from the Round Top pinnacle. 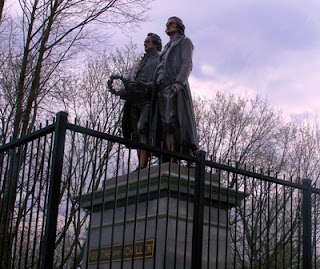 The Park is located on the North side of the city in an area that was called the “German section” because of the many German families living in the surrounding streets.  So in 1905 on the 100th anniversary of the death of the German poet, playwright, historian, philosopher, Friedrich Schiller it was renamed Schiller Park.

The German American societies of the city raised money for a statue to Schiller. Today the statue of Schiller posed with his long time friend another famous German writer Goethe, stands at the top of the stairs to one entrances to the park.

“Fritz” Schiller as his friends called him has been sort of forgotten by modern times and few people that I spoke with even knew why the park was called Schiller Park or better yet who Schiller was.

For German American’s of the 1900’s he was considered the Freedom Poet as he espoused holding Germany together and obtaining freedom for its entire population.  Many of his works have been put to music one of his plays Don Carlos was made into an opera by Verdi.  Another was William Tell.  But the clincher is one that is known by most people… including today’s younger set, it is called "Ode an die Freude “ or Ode to Freedom.

Beethoven wanted to put this one special poem to music, as did many others whose renditions were sung and celebrated by choruses… and yet he felt none were perfect.  The correct melody finally came to Beethoven when working on the 9th Symphony.   At the end of it he placed the poem to music... we know it as “Ode To Joy”.

Today as then it is sung, played and revered through out the world. Yes we sing Fritz Schiller’s words today; he is not forgotten by any means!

Please watch this video and enjoy the music of Beethoven and poem by Fritz Schiller!

Posted by Back Street Mary at 7:53 PM